What Is a Vestigial Tail? 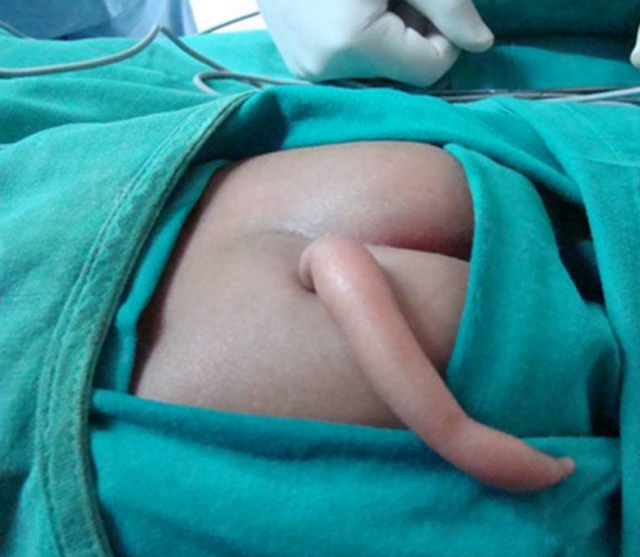 How does a vestigial tail form?

All humans are created with a small tail that is later absorbed by the body and developed into the tailbone. In some rare cases, small amounts of tissue are left hanging on the tailbone area of the body. Most often, the small piece of skin contains no bones but does contain nerves and blood vessels. In some rarer cases, there are up to five vertebrae in the small tail, resulting in a true human tail, or vestigial tail.

According to experts, this human tail is not really a tail at all. It is thought to be a hiccup in the natural human development process and sometimes linked to spina bifida. Typically, white blood cells degrade vertebrae six to 12 in the 8th week of gestation. The 4th and 5th vertebrae are shrunk during the process and eventually, skin covers the new spinal cord. If white blood cells do not absorb the latter vertebrae 100%, a tail could be left.

The longest known tail is 13 inches long and belongs to a man in India.

Are there any risk factors that cause a vestigial tail?

There are no known risk factors for a vestigial tail. All infants develop similarly, independent of genetic conditions or disease, and the vestigial tail present in early development eventually ends up as the coccyx bone (the lowest part of the spinal column). Male children are twice as likely to be born with a vestigial tail as female children.


What are the symptoms of a vestigial tail?

Other than a protrusion at the top of the buttocks, there are no symptoms associated with a vestigial tail. In most cases, no vertebrae are present in the tail, though nerves and blood flow are present. However, if the tail is not removed, it could interfere with sitting. The tail can be up to 13 cm (about 5 inches) long and contract and move.

What complications can result from having a vestigial tail?

How is a vestigial tail diagnosed?

Diagnosis of a vestigial tail is made visually. The tail is clearly visible via ultrasound, in extreme cases, and during the initial physical examination after birth.

What is the treatment and prognosis for babies born with a vestigial tail?

In most cases, the vestigial tail is removed soon after birth. Some parents choose to leave the tail in place, especially in cases where the tail appears as a small nub near the lower spine. Surgical removal of the vestigial tail causes no long-term side effects in most patients.

In most cases, having a vestigial tail does not impact lifespan. However, the number of cases with vertebrae present in the tail is too small to determine prognosis.