Is It Safe to Drink Tap Water During Pregnancy? 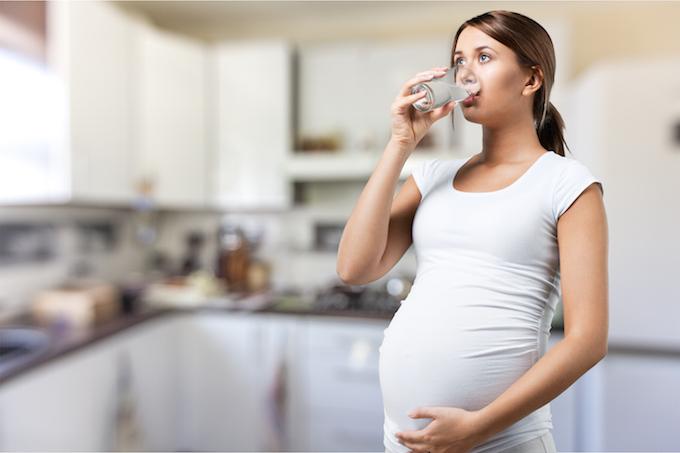 Hydration is important in pregnancy

Staying sufficiently hydrated during your pregnancy, as well as in any other time of your life, is extremely important. Hydration allows the body to perform all functions more smoothly, including brain functions, kidney functions, and digestive functions. Bottled water is a popular way to stay hydrated right now, though many people find it wasteful and would much prefer drinking from the tap. Clearly, such behavior saves you money and saves the environment from the millions of used water bottles that will surely end up in a landfill. However, if you are pregnant and drinking tap water, you should know that certain chemicals that can be found in your drinking water might have a negative effect on the fetal development of your child.

Fluoride was added to tap water in the US and Canada to lower tooth decay and cavities. However, this recent study from Canada shows that that higher fluoride intake during pregnancy published in JAMA Pediatrics was associated with lower IQ scores in boys. These findings indicate that pregnant women should lower fluoride intake during pregnancy. Regular water filters do not reduce significant amounts of fluoride in tap water, nor does boiling water reduce fluoride. Bottled water does usually not contain large amounts of fluoride, and would be an option for pregnant women considering lowering their fluoride levels in water.

Manganese and iron in tap water

In a recent study, the effects of manganese and iron in drinking water on developing fetuses were studied. Manganese and iron are found in some drinking water supplies, and they are the part of the water that may cause reddish-brown stains on your household items, such as your bathtub or sink. Water with these ions is called hard water, and in general, is not at all harmful to consume. According to the study, though, these compounds in drinking water might actually cause lower birth weight in babies that were exposed to them. The low birth weight was not associated with preterm delivery. Babies chronically exposed to these compounds through their mothers drinking water reached full term but were smaller than average. Low birth weight can have many negative effects on a child throughout the duration of his or her life, including lower IQ’s, weight problems, and generally poor health.

Recommendations for drinking water in pregnancy

Obviously, this does not mean you should stop drinking water altogether during your pregnancy. Try finding out what the manganese and iron content of the water from your tap is. If the content is low, continue drinking it as you normally would. If you’re worried about the amount of manganese and iron in your water or are unable to find out what the content is, consider purchasing a quality water filter. These are quite common and relatively inexpensive. Before you buy that filter, find out exactly what it does an how it works. Find out exactly which elements it filters out and how much. Many filters, for example, do you remove sufficient amounts of fluoride, and cooking does not remove any either. One option would be to use bottled water as it does not contain significant amounts of these elements.

As an expectant mother, the last thing you want to do is hinder your child’s development. Drinking water and staying well hydrated for the duration of your pregnancy is very important, so making sure the water you’re consuming is clean and safe for you and your baby should be a priority.