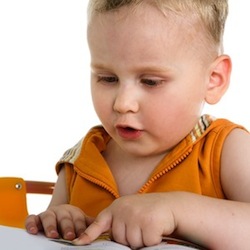 Childhood obesity is a growing concern around the world. There is increasing evidence that excess pounds in childhood threaten the child's health well into adulthood and advanced age. As the physical complications of obesity are being studied, so are the academic ramifications. One such study indicates that kids who are too heavy are more sluggish thinkers than their thinner peers.

Charles H. Hillman, a professor of kinesiology at the University of Illinois Division of Nutritional Sciences in Urbana, led a study involving 74 children to see if obesity had any influence on a child's response to stimuli. Also under scrutiny was the level of impact, if any, that obesity has on the cerebral cortex while action is being monitored.

Hillman's study involved 74 preadolescent children, half of whom were clinically obese and half whom were of healthy weight for their height. During the experiment, each child wore a specially-designed cap that recorded his or her electroencephalographic activity while completing a specifically chosen task.

A sequence of graphic images of three fish were flashed to the children and the children were asked to focus on the middle fish while indicating with a button if the fish on either side were pointing in the same or opposite direction.

The children of healthy weight were quicker to respond and responded with more accuracy than the obese children. Additionally, when mistakes were made, the healthy children were quicker to realize the mistake and fix it. As the experiment became increasingly complex and "the task required greater amounts of executive control, the difference was even greater," according to Hillman.

The second phase of the experiment measured electrical activities in the brain "at the intersection of thought and action." The object was to measure the electrical pattern of error-related negativity (ERN). The healthy-weight children were more efficient at upregulating the neuroelectric negative response that governs error evaluation.

Hillman likens the experiment to typing: "you don't have to be looking at your keyboard or your screen to realize that you've made a keystroke error. That's because action monitoring is occurring in your brain's prefrontal cortex," says Hillman.

As an example common to childhood, Hillman says to imagine "a child in math class constantly checking to make sure she's carrying the digit over when she's adding. That's an example."

According to co-author Naiman Khan, the study brings a degree of understanding to the connection between healthy weight and academic achievement. He further adds "it's exciting to be able to use functional brain imaging to see the way children's weight affects" cognition and achievement.