Good news for grandma! Researchers recently discovered that postmenopausal grandmothers who babysit their grandchildren one day a week score highest on tests of mental acuity. Too much of a good thing, though, can be truly too much. Grandmothers who babysit five or more days a week score lowest in these tests of mental sharpness. Why? It's probably not the rambunctious kiddos. 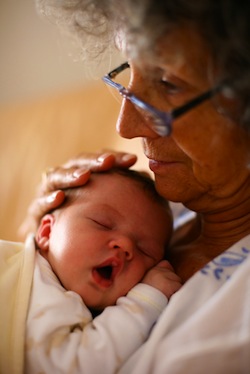 Active social engagement in one's golden years is vitally important for keeping the mind sharp and most grandmothers will agree that their grandchildren provide social engagement at its most active and rewarding best. Regular social interaction with others is an effective way of lowering one's risk of Alzheimer's disease and other age-related cognitive disorders and it just keeps life interesting.

A group of researchers in Australia enlisted 186 women who were enrolled in a study called the Women's Healthy Aging Project to test their mental skills and describe their babysitting activities during the previous year. Each woman was postmenopausal and between the ages of 57 and 68. Of the 186, 120 of them were grandmothers.

The three tests of mental agility were the:

The grandmothers taking care of grandchildren one day a week during the previous year scored highest in two of the three tests — the SDMT and the California Verbal Learning Test, especially the section of the California test involving immediate recall performance. The grandmothers babysitting five or more days a week during the previous year scored the lowest, especially in test areas that covered working memory and mental processing speed. The research team was surprised by this finding.

Dr. Margery Gass, the executive director of the North American Menopause Society (NAMS), was not a part of the study, but in response to it, she says, "We know that older women who are socially engaged have better cognitive function and a lower risk of developing dementia later, but too much of a good thing just might be bad."

The Australian study did not delve into why the women kept busiest with grandchildren scored lowest but the researchers are already actively engaged in continued study of the matter. The lower scores could result from the mood of an exhausted grandmother but there are hints in the study that point to the grandchildren's parents.