May 22, 2014, was a big day for Karlesha Thurman. One reason for her big day was long planned and well earned, while the other took her by surprise.

The 25-year old California woman earned her bachelor’s degree in accounting from California State University, Long Beach. May 22 was graduation day. As with so many of her fellow graduates, her most beloved family members were in the audience to watch her walk across the stage and receive her coveted diploma: her mother and her 3-month-old daughter, Aaliyah. The day was filled with big smiles, big pride, and a well-deserved big sense of accomplishment. 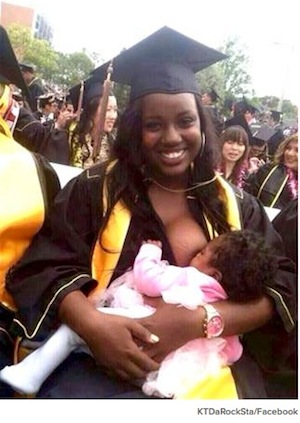 After the official graduation ceremony, some of Thurman’s classmates asked to meet her daughter so Thurman retrieved Aaliyah from her grandmother’s arms. The baby’s excitement soon turned to the fussiness of hunger so Thurman did what so many mothers do. She started breastfeeding her daughter.

The act of nursing her baby didn’t raise any eyebrows, except from one friend who thought the sight of this highly-accomplished new mother breastfeeding her baby was “cool” enough to commemorate in photography. She took a photo of Thurman, still in cap and gown, nursing her daughter while smiling proudly into the camera.

The big surprise came a couple weeks later, when Thurman posted the photo of herself breastfeeding on graduation day to the Facebook page of Black Women Do Breastfeed, an advocacy group that encourages black women to breastfeed their children. Thurman posted the photo “to show it’s natural...normal...and nothing wrong with it.” She says she “didn’t even know there was a big controversy about breastfeeding in public.”

She soon found out what a highly charged controversy such a natural act creates. Many friends of the page praised her for her academics as well as her dedication to her baby. Others criticized her severely for an act they deemed inappropriate. Before long, she deleted the photo.

The Centers for Disease Control and Prevention reports 77% of all babies born in the US in 2010 were breastfed, at least for a while. The rate drops, however, when new black mothers are considered without inclusion of other races. Only 62% of black mothers chose to breastfeed that year.

Diana West attributes the controversy stirred by Thurman’s photo and other criticisms of public breastfeeding as societal confusion between a sexual breast and a lactating breast. West, a lactation consultant and La Leche League International spokeswoman, says that although breastfeeding is on the rise in the US, photos such as Thurman’s help tame the backlash that still occurs when nursing is done in public places.

Thurman’s mother breastfed her and her three siblings. She encouraged Thurman to breastfeed, too. Thurman has black friends who are breastfeeding babies. “If you can give your child a gift as great as breast milk,” she says, “I don’t see why you would deny them that because of society.”