Chickenpox During Pregnancy - How Serious Is It? 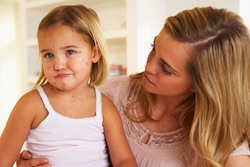 Chicken pox or varicella is usually worse in adults who didn't have chicken pox as children. It's even worse in pregnant women because it puts them at high risk of developing life-threatening pneumonia.

The varicella virus is usually transmitted by close contact from one person to another, but it can also travel through the air (via coughing or sneezing, for instance) and infect someone across a room. The contagion risk for chicken pox is very high: 60-90% of people who aren't immune will become infected after coming in contact with a person in the infectious stage of the illness.

Typically, the chickenpox rash develops 11-21 days after initial exposure. But an infected person can transmit the virus for several days before the rash appears, and continues to be infectious until the rash is gone and the lesions have dried up, which takes 7-10 days. If a woman develops chicken pox early in pregnancy, the rate of transmission to the fetus is relatively low.

One to 2 out of 100 babies born to mothers who had chicken pox in the first 20 weeks of pregnancy will develop birth defects involving the arms and legs, have eye infections or scarring of the skin, or grow poorly. The biggest problems occur in babies who are exposed to the chicken pox virus between five days before and two days after delivery. The chance that they will be born infected is high, and the risk of death is also high among infected babies.

--> READ ABOUT OTHER CHILDHOOD INFECTIONS

--> READ ABOUT INFECTIONS DURING PREGNANCY