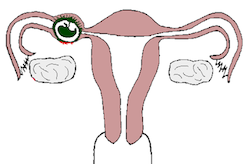 Researchers noted that women who experience ectopic pregnancy are often less fertile following the pregnancy. Impaired fertility could account for the difference in total number of children. The women were expected to try to conceive more often, but even trying to have more children did not make up the gap caused by the first ectopic pregnancy. On average, the women in the study group birthed one less child than comparable women who gave birth after their first pregnancy.

Can Ectopic Pregnancy be Prevented?
There is no way to prevent ectopic pregnancy because there is no known definitive cause - other than narrow fallopian tubes, which is not a condition determined before pregnancy in most cases. Ectopic pregnancy can cause pain before pregnancy is even determined, so women of childbearing age, especially those currently trying to conceive, should respect any and all abdominal or low pelvic pain and seek medical attention if pain persists or grows worse.