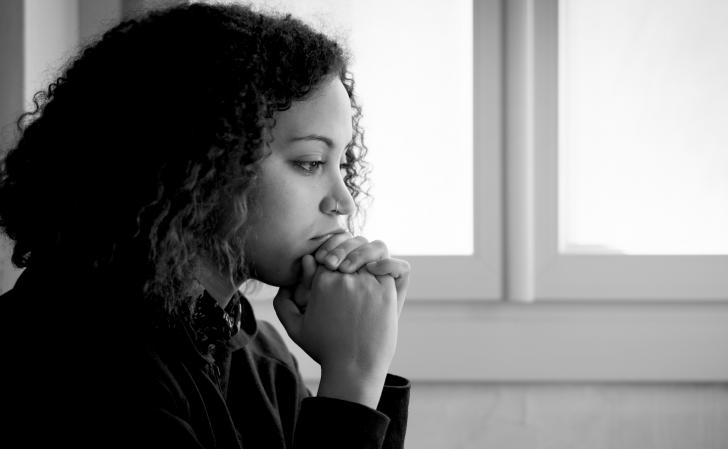 Early miscarriage symptoms may start out as a pain in the lower abdomen similar to menstrual cramping. The pain may stay the same during the miscarriage or could increase in intensity to the point where medical attention is sought. Any form of cramping during pregnancy (especially if it's associated with red bleeding) should be immediately reported to the obstetrician.

Spotting is common during the first month of pregnancy, but spotting is different from bleeding. Miscarriage symptoms are commonly combined so the cramping may start at the same time as vaginal bleeding. If blood is bright red and flowing like a menstrual cycle, immediately head to the emergency room. Active vaginal bleeding during pregnancy is not normal at any time.

Not every miscarriage starts with bleeding and cramping. In some cases, the miscarriage starts an infection in the uterus, which leads to vaginal discharge. The vaginal discharge will be thick, possibly yellow or greenish and have a strong smell. Other septic miscarriage symptoms include fever, lethargy, fatigue, and chills. Even if you think the symptoms are associated with the flu or common sinus infection, they can be life-threatening if attributed to a septic miscarriage, so seek emergency medical attention right away.

Abdominal or back pain accompanied by bleeding with an open cervix. Miscarriage is inevitable when there is a dilation or effacement of the cervix and/or there is a rupture of the membranes. Bleeding and cramps may persist if the miscarriage is not complete.

It is possible to experience a miscarriage without even knowing it. A missed miscarriage is when embryonic death has occurred but there is not any expulsion of the embryo. Signs of this would be a loss of pregnancy symptoms and the absence of fetal heart tones found on an ultrasound.

Many people are confused by the word 'abortion' in the term 'missed abortion'. As a result, the term is no longer commonly used. A missed abortion is more frequently referred to today as a delayed or silent miscarriage. This means that the embryo is no longer living (or was never fully formed), though the body has not yet shown signs of miscarriage. It is only classified in this manner, however, if it occurs before the 20th week of pregnancy.

There are a few reasons why a missed abortion may occur. The majority of cases are thought to be due to abnormalities during cell division, though not much is known as to why this happens. A blighted ovum, which is where an egg is fertilized with the placenta and no embryo, is another cause for this condition. The other cause is a molar pregnancy, which is where the cells in the placenta grow out of control, creating a massive cyst. In both of these cases, the embryo cannot survive.

There are a few ways that a missed miscarriage can be handled. One is to allow it to run its course and allow the body to naturally expel the embryo or fetus. The other option is to have a D&C procedure to get rid of the tissue. (See an ultrasound of a missed abortion.)

"Primary recurrent pregnancy loss" refers to couples that have never had a live birth, while "secondary RPL" refers to those who have had repetitive losses following a successful pregnancy.
There are many known causes for RPL, however, there is a significant number of couples in whom even after a thorough workup, no specific cause is found.

In a couple with RPL, many doctors usually perform most, if not all, of the following procedures:

According to the American College of Obstetricians and Gynecologists, cultures for bacteria and viruses, glucose tolerance testing, thyroid tests, antibodies to infectious agents, anti-thyroid antibodies, paternal human leukocyte antigen status, or maternal anti-parental antibodies are not beneficial and, therefore, are not recommended in the evaluation of otherwise normal women with recurrent pregnancy loss.

It's important to remember that about 95% of women who have one miscarriage will conceive again and give birth.

Why does a miscarriage occur?

A miscarriage, also referred to as a spontaneous abortion, occurs in many pregnancies. Typically, a miscarriage happens before the end of the first trimester, but it can happen at any time up to 20 weeks. After 20 weeks, the loss of a pregnancy is considered a preterm birth.

Odds of a miscarriage

According to findings presented at the American College of Obstetricians and Gynecologists (ACOG) 57th Annual Clinical Meeting, a successful pregnancy can be predicted with up to 94% accuracy between days 33 and 36 after conception using transvaginal ultrasound to detect 3 markers:

By the second trimester, the membranes protecting the baby are in place. If a woman feels fluid leaking from the vagina or her bag of waters ruptures, this is a clear sign of miscarriage or early labor. It may not be a gush of fluid as is represented in Hollywood movies. Instead, women more commonly feel just a small trickle of fluid similar to urination. If any tissue or grayish material is passed, collect it and immediately take the tissue to the hospital.

If the doctor cannot find a heartbeat in the second trimester during a regular doctor’s visit or as part of an emergency visit it could be one of the signs of miscarriage. At times, the heartbeat can be difficult to find with a Doppler handheld unit, but an ultrasound will verify the missing heartbeat.

Women are most fertile in the time immediately following a miscarriage, but most obstetricians and gynecologists will suggest waiting until the first normal menstrual cycle has passed before trying to conceive again. In some cases, doctors suggest waiting six months or more before trying to conceive, but this depends on the reasons for the miscarriage and the common practices of the attending physician.

Miscarriage is more common than many women understand. Just because a miscarriage occurs, women are not necessarily less likely to conceive and achieve motherhood. It is best to work with the attending Ob-Gyn to maximize the chance of carrying the fetus to term after a miscarriage.

How long to wait after a miscarriage

The female body is ready to conceive again immediately after a miscarriage. Hormone levels are at their highest, so infertility is reduced and fertility increased. However, for the sake of the female body and reducing the chance of a second miscarriage, many doctors will suggest waiting for at least one regular menstrual cycle to increase the chances of getting pregnant and maintaining the pregnancy. Other doctors will suggest waiting up to six months to increase the chances of getting pregnant without complications.

The chances of achieving pregnancy after a miscarriage are often the same as they are before the miscarriage. Women, who try for a second pregnancy, tend to be successful 95% of the time. Women with two or more miscarriages have a success rate of 75% on subsequent tries. Health, illnesses, disease processes and other contributing factors will affect the chances of getting pregnant, more than a miscarriage. However, it is important to note that some women are more likely to have miscarriages for unknown reasons. Testing does not always determine a cause for miscarriages.

Read More:
What Causes A Miscarriage At Six Weeks?
Second Trimester Miscarriage
What Is a Chemical Pregnancy?
How Often Does Miscarriage Happen