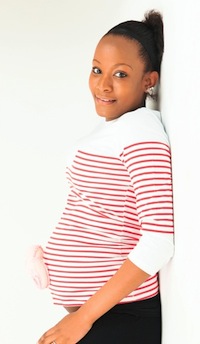 Pregnant women are just as good at judging whether their now-expanding bodies will fit through a door or other openings as people who are not expecting, according to a new study published in Springer's journal Attention, Perception, & Psychophysics.

Human brains continually re-evaluate their perspective of the environment based on the individual’s changing body size and physical abilities. In other words, the mind is able to assess how the body can interact with its surroundings. Scientists refer to this ability as “perceptual-motor recalibration.” This skill helps people choose an appropriately sized chair and walk through doorways.

Some medical professionals speculate pregnancy hinders a woman’s perception of her affordances because maternity causes such swift physical changes. In this new study, scientists set out to investigate perceptual-motor recalibration in pregnant women. They wanted to know if an expectant mother bases her affordances on her pre-baby body or if her brain recalibrates constantly in tune with her changing body.

The scientists initially assessed 11 women and found study participants had no problem determining which doors were large enough to fit through in a sideways position, even as the pregnancies progressed. This means pregnant women could correctly assess the spatial relationship between their slowly growing bellies and their environment.

The researchers wondered if the pregnant women were able to adapt simply because of daily opportunities to learn about the dimensions of their bodies. To explore this further, the scientists designed another experiment in which they asked participants to wear an article of clothing that simulates the ninth month of pregnancy. At first, study participants grossly miscalculated affordances and often overcompensated for their bellies. After some practice moving around, however, participants eventually learned to assess affordances accurately.