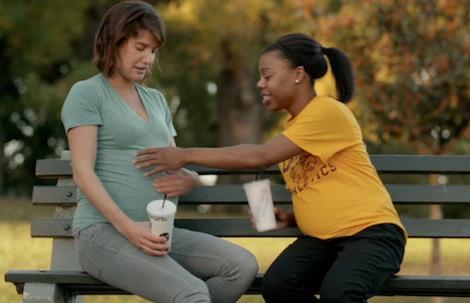 Kris Swanberg is director of a new movie called Unexpected, which tells the story of two women who form an unlikely friendship when unexpected pregnancies draw them together. It wasn’t until filming the delivery-room scene, where one of the movie’s main characters delivers her baby, that Swanberg realized her movie tells the story of pregnancy from a fresh perspective. Most movies, she recalled, portray the man’s perspective in the delivery room but Unexpected is all about the women.

The movie stars Cobie Smulders, who you’ll remember from the hit TV series, How I Met Your Mother, and Gail Bean, a native of Atlanta, Georgia, who has had increasingly impressive roles in TV and on film since 2011. Smulders plays Samantha Abbott, an inner-city Chicago schoolteacher facing new possibilities during the last semester of her teaching contract. Bean plays Jasmine, one of Abbott’s most promising students. Both women find themselves unexpectedly pregnant at the same time.

Though there are men in their lives, Abbott and Jasmine grow close as the teacher/student bond blossoms into friendship as they share hopes, dreams, fears, and doubts as their pregnancies progress.

Swanberg says she didn’t set out to make a movie from the female perspective but, as the project progressed, “it just sort of happened that way.” She says the movie is based largely on her own personal experiences. Swanberg is not only a movie director, she’s a mother who was expecting her second child within days of the July 24 theater release of Unexpected. Her husband, Joe Swanberg, is also a filmmaker.

Baby talk was a frequent topic of conversation during the filming of the movie, which wrapped in October 2014. Coincidentally, during the last several months of filming, Smulders was pregnant, too. She jokes that her growing baby bump saved money for the costume budget since belly prosthetics weren’t needed. Smulders and her husband, funnyman Taran Killam of Saturday Night Live fame, have two daughters: 5-year-old Shaelyn Cado, and the second baby born just three weeks before the Unexpected premier at the 2015 Sundance Film Festival in January. The baby’s name has not been made public.

Adding another layer of motherhood to the film is Elizabeth McGovern, who plays Samantha Abbott’s mother. McGovern plays Cora Crawley, Countess of Grantham, and mother of three daughters on the immensely popular British TV drama series, Downton Abbey. McGovern starred opposite Kevin Bacon in the 1988 romantic comedy, She’s Having a Baby, in which the male lead character achieves emotional maturity upon the birth of his first child.

Unexpected has been met with favorable reviews:

Unexpected is Swanberg’s third feature film. After she was laid off from her job teaching high school in Chicago, she launched a small artisan-style ice cream company (Nice Cream) that met with success but was eventually shuttered by the Illinois Department of Public Health because she would not build a manufacturing facility and obtain a commercial dairy license. She went into film instead.