Follow us on Instagram
Our app takes the guesswork out of getting pregnant. Get Obie for iOS Now!
Lifestyle » Maternity Fashion 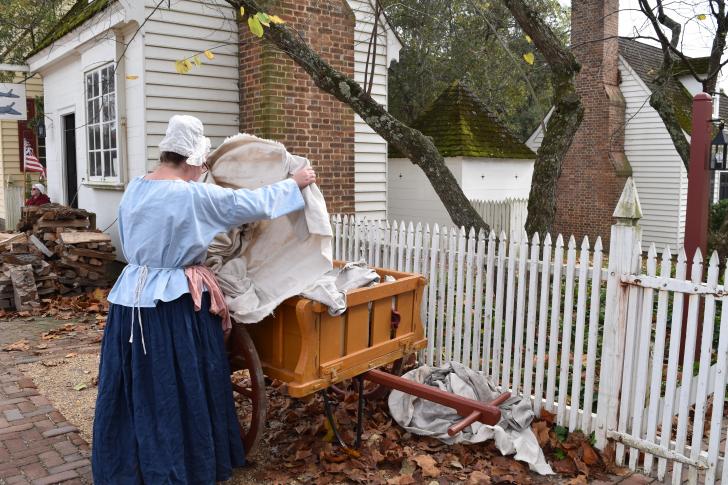 The Middle Ages (a time period in European history between the fall of Imperial Rome, in the 5th Century, to the fall of Constantinople in 1453). Throughout this period, women lived in a patriarchal society. Their roles included wife, mother, peasant, artisan, nun, abbess or queen regnant. Their maternity clothing consisted of panels on their regular dresses which were loosened as their bellies grew.

Women continued to be the property of men. Their dress was strictly controlled, which reflected the rest of their lives. Again, their maternity clothing consisted of loosened dresses.

In Colonial America, women’s lives usually centered on their families. The men represented the family, women had practically no rights, and there were high mortality rates for mothers and babies. The fashions of motherhood consisted of oversized dresses.

White women continued to have few rights, and black slave women had no rights. They both wore oversized clothing for maternity clothes.

In 1913, women had few rights. They were not allowed to vote. They started to wear restrictive maternity corsets which were uncomfortable and binding.

In 1920, the 19th Amendment was ratified, and women were given the right to vote. In the flapper era, maternity clothing became looser and more comfortable. Women like Amelia Earhart, a female pilot, was a role model for a more liberated woman. This was reflected in the clothing women wore.

In the 1930’s, women were supposed to hide their pregnancies with their clothing, and to “make do” in the Great Depression. If they were allowed to work, their jobs were sex-typed and lower paying. They were not supposed to take jobs away from men.

In the 1940’s, women contributed to the war effort, and performed jobs that men did before they were called into service. Rosie the Riveter came into being, who was a cultural icon of World War II, representing the women who worked in factories and shipyards as part of the war effort. Wonder Woman was created. Women wore more tailored maternity clothes reflecting their new role in the workplace.

In the 1950’s, women were expected to marry, have children, and to be the perfect mother and wife. They were supposed to stay at home and to clean and cook, and serve their husbands. Pants were introduced as maternity clothing. Lucy of the “I Love Lucy” television series was pregnant and wore maternity clothes on screen.

In the 1960’s, the women’s liberation movement was born. Women demonstrated for women’s liberation, and for peace and equality. Jackie Kennedy, the First Lady, was photographed wearing maternity clothing, which was tailored, and other women wore loose, and long and short dresses.

In the 1970’s, the women’s liberation continued to make inroads. In 1973, the United States Supreme Court in Roe v. Wade, legalized first-trimester abortion and struck down many state restrictions on abortions in the United States. In 1978, the Pregnancy Discrimination Act banned employed discrimination against pregnant women. Women’s maternity clothing was varied and free, which reflected the times.

In the 1980’s, maternity fashion consisted mostly of baggy dresses. Baby bumps were camouflaged. Increasingly, more women were in the workforce. In 1981, Sandra Day O’Connor became the first woman to serve on the United States Supreme Court. In 1984, Geraldine Ferraro became the first woman to be nominated to be vice president on a major party ticket. In 1986, that Court held that a work environment can be declared hostile or abusive because of discrimination based on sex, an important tool in sexual harassment cases.

In the 1990’s, women showed off their pregnancies, and there was an end of concealment. The famous photograph of Demi Moore, in the nude and pregnant, on the cover of the magazine Vanity Fair, reflected the body-conscious culture. The women’s movement continued to make progress. In 1992, record numbers of women were elected to Congress, with four women winning Senate elections and two dozen women elected to first terms in the House. Anita Hill accused Supreme Court nominee, Clarence Thomas, of sexual harassment. In 1993, Ruth Bader Ginsberg became the second woman to serve on the United States Supreme Court. In 1994, The Violence Against Women Act was enacted to protect women victims of violent crimes. In 1997, Madeline Albright became the first female Secretary of State.

In the 2000’s, women continued to wear a variety of maternity styles, with pregnant celebrities leading the way with bare midriffs, and see-through clothing. Jennifer Aniston’s character on the TV series “Friends” appeared as a pregnant woman, and women copied her style. In 2004, the first same-sex women couple became legally married in the United States. American women served in the various war efforts. There was some regression in the law. In 2005, Congress passed the Partial-Birth Abortion Ban Act, the first law to ban a specific abortion procedure, which ban was upheld by the United States Supreme Court the following year. Rosie Pope, a maternity fashion designer, had a reality series, “Pregnant in Heels,”in which she provided a maternity concierge service for expectant parents.

In 2007, Nancy Pelosi became the first Speaker of the House. In 2008, Alaska Governor Sarah Palin became the first woman to run for vice president on the Republican ticket. Hillary Clinton lost the Democratic nomination to Barack Obama.

In 2009 and 2010, respectively, Sonia Sotomayor and Elena Kagan became the third and fourth female Supreme Court Justices. Women continued to become more active in the workplace. Some maternity clothing was designed for specific occupations, such as maternity scrubs for hospital employees, and uniforms for pregnant women serving in the military. In 2013, the ban against women in military combat positions was removed. Women fought for, but were unable to achieve, the fight against gender discrimination with their paychecks. In 2017, Congress had a record number of women, with 104 female House member and 21 female Senators, including the Chamber’s first Latina.

Currently, there is a variety of maternity sportwear for active women, one piece and bikini swimsuits for pregnant women, maternity evening gowns for glamorous parties, and maternity wedding dresses. In fact, there is maternity clothing for every conceivable activity and occasion, with a wide variety of styles. Pregnant bodies are exposed, highlighted, and honored. You could say “[w]e’ve come a long way, baby.”

These collages by Susan L. Pollet, Esq. illustrate the social, political, and legal situation of women and the clothes they wore while pregnant throughout history.