Safe Placement in Sling is Vital to Baby’s Health

Baby slings provide an ideal, hands-free way to keep a baby close while tending to other activities but the slings aren't always used correctly. Babies can be injured — or worse — when slings don't fit properly or when the baby is poorly positioned within them.

An Australian survey indicates that one in 20 babies have been injured or almost injured while in a sling. Since 2010, three Australian babies have died from suffocation while in a sling, as have 14 babies in the United States in the last 20 years. These tragedies have prompted Queensland authorities to launch a campaign stressing the importance of safe placement in a sling. 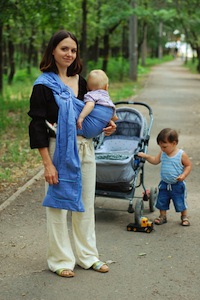 Kirsten Vallmuur says suffocation poses the biggest risk for babies in slings. She is affiliated with the center for accident research and road safety at the Queensland University of Technology (QUT). The importance of proper placement was recently reinforced when the Queensland coroner recently published a report of one such accident.

"Baby T" was thought to be nestled safely in her sling, sleeping as her parents strolled through a shopping center. Once her father noticed her pale arm hanging out of the sling, Baby T's mother realized she wasn't moving. The baby's mouth and nose were covered in blood-stained froth.

An ambulance was called, CPR performed, and Baby T was hospitalized but didn't survive. John Lock, the Deputy State Coroner, ruled the cause of death to be a combination of three factors: the sling itself, a slight cold the baby had, and improper placement against her mother's body.

"When they are curled up with their chin on their chest pressed against the mother or the material, their airways are slowly compressed and they suffocate," according to Vallmuur.

A QUT survey of expectant parents and parents with infants not yet one year old revealed 95% intended to use or were already using a baby sling. Some were using it as many as three hours a day.

Australia has no current safety standards governing baby slings but the Queensland Office of Fair Trading expects to launch a national campaign in coming months. The campaign will include how-to videos on YouTube describing safe positioning and use, a social media campaign, and posters. The Australian Competition and Consumer Commission is taking part in an international collaboration to establish universal safety standards for using baby slings.