What is the Worst Part of Being Pregnant With Twins?

My twin pregnancy is a vibrant memory that I reflect on often. From the moment we found out as parents that baby number three was actually going to be babies number three and four to the moment the doctor pulled them out of my uterus and announced Baby A was a girl and Baby B was a boy, everything seems like it happened just yesterday; but one thing has faded over time – the pain of being pregnant with twins. 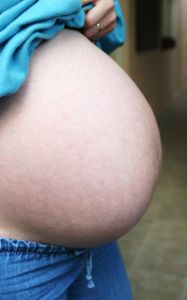 The Day the World Fell Apart
For the most part my pregnancy was relatively uneventful. During the first few months there were some complications and bleeding, so I was placed on bed rest for the duration of the pregnancy. I went into preterm labor before 30 weeks and gave birth very early, but these are all problems most women pregnant with twins have to put up with – my pain was something few women experience, however.

On the last day of my twin pregnancy my waist measured 62-inches around. Despite ultrasounds reporting the twins weighed less than four pounds each, my obstetrician was extremely worried about the viability of the pregnancy for more than another week or two. I was barely able to walk into the examination room and it took two people to help me up on the examination table. When the doctor asked how I was feeling I just started crying and I didn’t stop for what felt like forever.

I was immediately admitted to the hospital and in a flurry of activity the twins were born less than 10 hours later. My life as a mother of twins started that day and the pain I felt ended, but I remember my doctor’s response to my pain all too well. He calmly said, “Being pregnant with twins sounds exciting, but more women need to see just how painful twin pregnancy can be.”