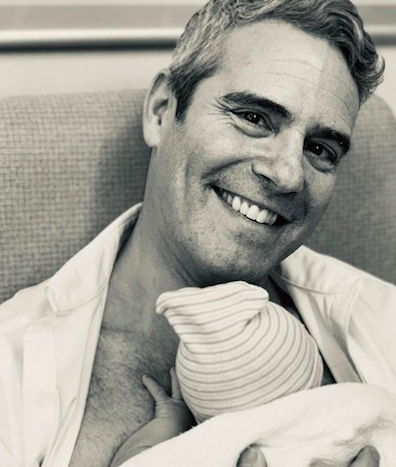 Congratulations to Bravo star and host of Watch What Happens Live, Andy Cohen welcomed a baby boy on February 4. He shared an adorable photo on Instagram with this caption:

Andy, 50, only recently announced that he was going to be a father via a surrogate. While hosting the New Year’s Eve show with Anderson Cooper, he gushed about what it means for him to become a father:

"When I was growing up and when we were growing up … I just never thought it would be possible as a gay man to grow up and have a family. And then here we are in 2018, almost [2019], and anything’s possible. And I’m so grateful to a wonderful surrogate that I’m working with. By the way, by the time it became possible, I was kind of having too much fun in my life to say, ‘I don’t think I can do this right now.’ But here I am, I turned 50 this year. It takes some people longer to get to that place. And it took me that time.”

Update: Instagram was filled with photos from Andy's baby shower on January 27. Andy was thrown a shower by stars of all seasons from "The Real Housewives" franchises in Beverly Hills. He shared via Instagram:

"Thanks OG’s Kyle, Vicki, Nene, Ramona & Teresa for hosting a party like no other. And @brucebozzi, the Palm Beverly Hills is now an iconic stop on any Housewives Tour. It’s the Room Where It Happened."

Little Benjamin weighed in at a very healthy 9 lbs, 2 oz. Congrats to Andy!