Mayim Bialik’s approach to life may seem rather quirky to many but she’s been highly successful since she was just a kid, when her starring role as TV’s Blossom made hers a household name. She keeps us laughing now in her role as Dr. Amy Farrah Fowler on The Big Bang Theory. A neuroscientist on TV and in real life, as well as a mom, Bialik is a proponent of the attachment method of parenting and wants everyone to understand that “breastfeeding is NOT a sexual act.”

The actress recently spoke with Ricky Camilleri of The Huffington Post about her job on The Big Bang Theory, motherhood and parenting, and her thoughts on breastfeeding. Bialik made headlines in 2011 when she posted a photo online of herself nursing her son, Fred, on a subway in New York City. Fred was 3 at the time. 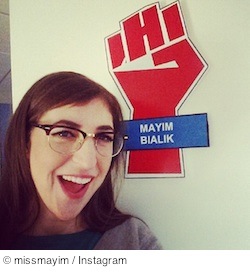 In response to the outrage her photo caused, Bialik says “What I like to point out is that was the best way for that subway ride to be pleasant for everyone.” She adds that she sees no more reason to cover up a baby eating than a baby drinking a bottle. She attributes the squeamish fuss to our cultural mindset that creates a “very, very bizarre relationship with breasts.”

Bialik, who seems to do nothing in small doses, is an advocate of attachment parenting, a philosophy that promotes strong, secure attachments between parents and children. Parents are taught to become closely tuned in to a child’s needs and signals from infancy onward. She feels so strongly about this very close form of parenting she wrote a book — Beyond the Sling: A Real-Life Guide to Raising Confident, Loving Children the Attachment Parenting Way — published in 2012.

Bialik, a vegan, is a self-described “die-hard Zionist” who frequently travels to Israel, where she’s spent several summers as a kibbutz volunteer in a dairy barn. In 2003, she married Michael Stone, a Mormon who converted to Judaism. Bialik and Stone, who divorced in 2012, have two sons: Miles Roosevelt Bialik Stone, born in 2005, and Frederick Heschel Bialik Stone, born in 2008.

Between babies, Bialik earned a PhD in neuroscience from the University of California, Los Angeles (2007). She has bachelors’ degrees in neuroscience, Jewish studies, and Hebrew studies.

Her dedication to a very hands-on style of parenting led Bialik in 2010 to abandon her career as a research professor and return to TV. In a 2012 CBS News interview, she describes the decision by saying, “I’m glad that I completed my PhD and I’m very proud of it but the life of a research professor would not have suited my needs in terms of what kind of parenting I wanted to do.”