The new Carrie Underwood, all trim with her new vegetarian ways, cannot hide a bump to save her life.

At a recent hockey game, country singing star Carrie Underwood was caught off guard by the jumbo tron. The star was supporting her boyfriend, Mike Fisher, at the Senators hockey game. She was tucked away ever so quietly in the private box when the camera caught her talking to a friend. As soon as she saw her face on the jumbo screen - she ducked out of sight like a kid playing peek-a-boo. Why so shy suddenly Carrie Underwood? Is there something you are trying to hide? 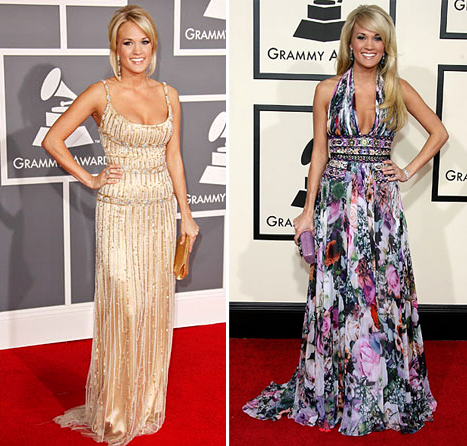 The star was clearly trying to hide something from the world with that striped drape she was wearing. The old Carrie Underwood, the one that was the star of American Idol, she could have hidden a pregnancy for quite a while under that fluctuating weight. But, the new Carrie Underwood, all trim with her new vegetarian ways, cannot hide a bump to save her life. Maybe that is why the drape she was wearing (that looked more like a cape turned backward) was covering her tummy from view.

While there is very little talk about Carrie Underwood being pregnant, past rumors have left the star a bit on edge. She states that she will be pregnant when she gets married, but that is hard to do when you keep moving from boyfriend to boyfriend. The star has dated the likes of Tony Romo, Anthony Fedorov, Drake Clark, Chad Engleton, Oliver Trevena, Chace Crawford, Ryan O'Neal and Michael Phelps. And that is all within a 6 year time frame.

Carrie Underwood is most notably known for her music, but her body is something she has come to love as well. While she was on the American Idol stage, Carrie Underwood carried pregnancy fat all the time. But, as a vegetarian, she lost the weight and was voted as the World's Sexiest Vegetarian. She holds the title with Chris Martin of Coldplay and Shania Twain another country music star. She beat out sexy vegetarians Joaquin Phoenix and Reese Witherspoon. The vegetarian status must be a bit lax because Carrie Underwood recently signed a deal with Hershey’s Chocolate and if I am not mistaken – chocolate comes from milk and milk from a cow.

Whether Carrie Underwood is pregnant or not, the world will soon know. One thing is for certain, the outfit she wore to the Senators game has pregnancy written all over it - you be the judge. In the mean time, the world will have to wait for another slinky shot of this country music diva in hopes of finding out whether or not Jesus will need to take the wheel of her minivan in the near future.