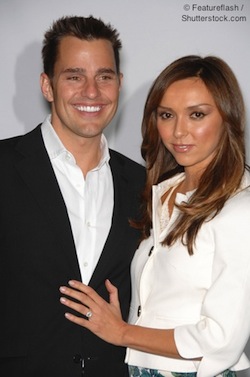 Remember Giuliana and Bill Rancic? How could you forget! The pair has become the poster duo for fertility and women’s health issues, from IVF to breast cancer, as a result of sharing their struggles on their reality show, Giuliana and Bill. But good news for the couple is finally here! Giuliana and Bill are finally pregnant through gestational surrogacy.

The couple appeared on the Today Show on April 23, 2012, to break the good news that we’ve been holding our breath for since finding out that Giuliana was diagnosed with breast cancer while preparing to undergo another round of IVF. The news comes only a week after gossip sites were buzzing with the rumor that the couple might be adopting – Giuliana had told sources that the couple was considering adoption based on years of fertility struggles.

However, yesterday morning, the rumors were put to rest, and the couples “prayers have been answered…It was one of the best moments of my life,” Giuliana said, “If not the best moment of my life…It’s incredible,” she continued, “We’ve been trying for so long, we’ve been through so much…And to finally get that call from the doctor, it was just another world, another level.” Bill chimed in, “We are absolutely ecstatic to be sharing this with everyone who has been following our journey.”

The baby is due in late summer and while the couple knows the baby’s sex, they plan on keeping it a secret for as long as possible. By using a ‘gestational carrier’ the couple is able to have a biological child, brought to term by a woman who is able to carry the growing fetus. The couple used a reputable service, recommended to them by Giuliana’s former IVF doctor, in order to find the woman who would give them this incredible gift. “Once we met her it was an instinct we had, we could tell she was a great person,” said Giuliana. The pair has not revealed the name of the surrogate, though they visit her monthly and attend all her regular check-ups. "It's important to us to see the development and growth," Bill said. "At the end of the day, it's our baby. Genetically it's ours. It's our embryo. We feel very connected." The baby of the happy couple is already due in late summer.

We too have been following their heartbreak and hurdles, and couldn’t be happier for Giuliana and Bill! Congratulations!