Drew Barrymore and her husband, Will Kopelman, announced the arrival of their daughter, Frankie, on April 22. Frankie is daughter #2 for the couple, who have a 19-month-old daughter named Olive, and, according to an authorized statement via Barrymore's representative to People magazine, "Everyone is healthy and happy!"

Barrymore told an Associated Press interviewer earlier in April that parenthood is the greatest thing she's done in her life. In a February interview with People, Barrymore expressed excitement over having another daughter, saying, "I have everything I need. It's all about hand-me-downs and room sharing and all that stuff. I'm pretty psyched about that!"

Each of the Kopelman girls has a unique first name (Olive and Frankie) but they share middle names (Barrymore) and last names, of course. 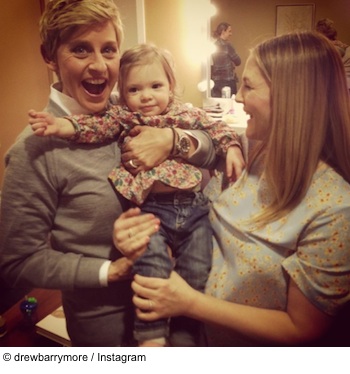 Just a few weeks after Olive was born, Barrymore was taping an episode of The Ellen DeGeneres Show, and explained how Olive got her name. Early in the pregnancy, Barrymore, now 39, and Kopelman, now 36, were reading a book on pregnancy. The book said, at three months, the baby is the size of an olive. She was Olive from that moment on.

There's no word yet on how baby Frankie got her name. Frankie is a nickname often given to children named Frances (female) or Francis (male). Perhaps Barrymore's god-daughter was a source of inspiration? Her god-daughter is Frances Bean Cobain, daughter of Courtney Love and Kurt Cobain.

Barrymore graces the cover of the June 2014 issue of Red, a magazine in the United Kingdom all about women, fashion, beauty, and lifestyle. Her interview and photo-shoot took place during the last part of her pregnancy with Frankie and she confessed to being "so ready to not be pregnant now" but she also says she's "loving being a mom."

At the time of the interview, Barrymore, Kopelman, and baby Olive were enjoying an extended stay at the home of Kopelman's parents in New York. Rumors were flying that the younger Kopelmans were there to seal the deal on a Park Avenue apartment although California is their undisputed home base.

Barrymore strongly values an intact family after growing up in a divided one. Her parents separated before she was born so she never knew a home with mother and father under the same roof. Although she claims to have accepted the situation and was OK with it as a child, she tells the magazine that: "It's shocking to me that someone can make that choice" (parental separation and divorce) and that she "could never accept it in a partner." She says parents need to think about the emotional needs of the children before disrupting their lives so drastically.

The June issue of Red goes on sale on May 1.