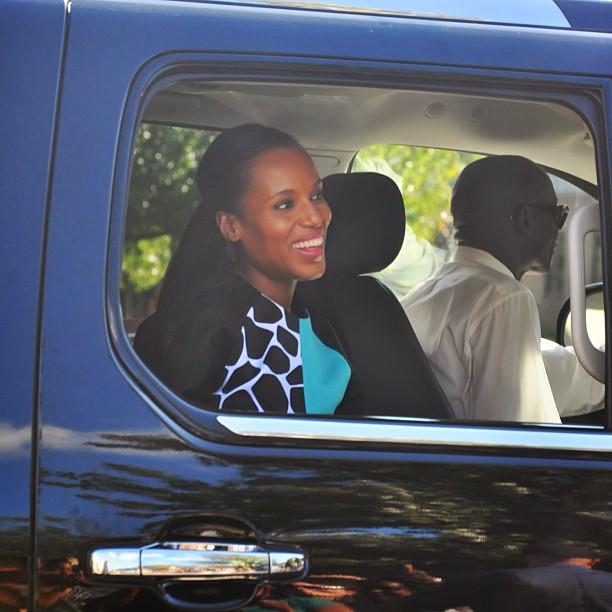 All eyes have been on Kerry Washington lately; she strolls down one red carpet after another, so elegantly attired she makes pregnancy look quite glamorous. When asked what’s the secret to her stylish pregnancy wardrobe, she said it’s all about the fit.

Washington dazzled the cameras on January 17 at the Entertainment Weekly event to honor this year’s Screen Actors Guild (SAG) award nominees. She is nominated for the Outstanding Performance by a Female Actor in a Drama Series for her portrayal of crisis manager, Olivia Pope, in the highly successful TV series, Scandal.

When asked, she responded that the “first rule” to looking fashionable during her pregnancy is “what fits.” She looks for things that fit so she feels good in it and likes it herself, knowing she’ll “feel comfortable all night.”

Her “best accessory?” That’s the baby bump she dresses so tastefully. According to Washington, “the Laboutins (shoes) are great but this is the best accessory, I think this year,” referring to her expanding tummy.

On January 12, Washington turned heads in the chic, custom-designed floor-length gown by Balenciaga she wore to the 71st Annual Golden Globe Awards. At that event, she was a nominee for the Best Actress in a Television Series Drama for her performance in Scandal.

During her red-carpet walk at the Golden Globes awards show, Washington’s husband, retired NFL cornerback, Nnamdi Asomugha, was nowhere in sight. Washington confided to Ryan Seacrest that she felt “like I have the best date of the night, my little accessory here,” as she caressed her baby bump. It was the first time Washington herself mentioned her pregnancy in public although the official pregnancy announcement was made in October.

The proud papa was in attendance that night, joining Washington at the after-party hosted by the Weinstein Company and Netflix. Photos taken there were the first taken of the couple together in public since their wedding in June of 2013.

Privacy is highly valued by the couple, as indicated by her response when Washington was asked about cravings or other quirks of pregnancy. She responded with “You know, it’s sort of like the rest of my private life, I’m not talking about it that much, but I feel really blessed it just feels like a really good time.”