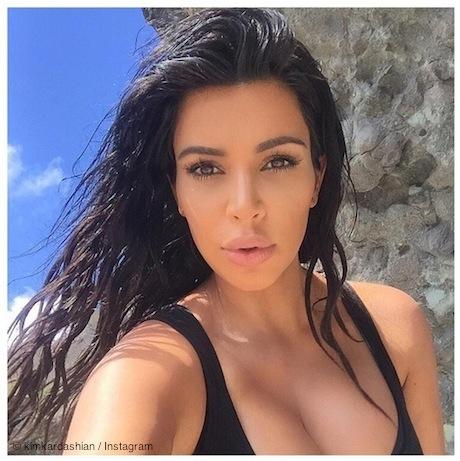 Kim is making internet waves in true Kardashian style after she posted a selfie from last week’s vacation at St. Barts in the French West Indies. Stealing the scene were her exceptionally plump “pregnancy lips” that many find too plump to be believed. Pregnancy does cause water retention that often makes the entire face seem rounder than before but it’s only Kim’s lips that seem to be affected.

Instead of pregnancy, many online commenters are asking if it’s not more likely lip “service” such as fillers, injections, and collagen that are causing the colossal Kardashian kisser. But might it be merely a purposefully provocative pout?

Kardashian claimed to have pregnancy lips in 2013 while pregnant with her first child, daughter North. Then, too, there was speculation that her plastic surgeon was more responsible for the prodigious pucker than her pregnancy.

Pregnancy, the FDA, and Lip Fillers

Why the uproar? First, everything a Kardashian does seems to cause an uproar. Perhaps, more importantly, is the concern that any kind of plastic surgery during pregnancy seems like a questionable thing to do.

The US Food and Drug Administration (FDA) does approve the use of soft tissue fillers (also called dermal fillers) for various uses in its list of approved cosmetic devices. Along with its approval, though, comes the warning from the FDA that safety of soft tissue fillers is unknown (untested) for use during pregnancy, breastfeeding, or in children younger than 18.

In some photos taken well after the birth of Kardashian’s daughter, her lips seem to have returned to their familiar pre-pregnancy size. That change could confirm hormone-influenced pregnancy lips or could be just a matter of time. Lip fillers and injections are temporary enhancements that are absorbed by the body after six to eight months.


If Kardashian’s new smile is the result of cosmetic enhancement, there is the concern that other expectant mothers may mimic the look although doing so could have an unknown effect on the health of the babies they carry. Never choose any elective surgery, even cosmetic surgery, during pregnancy without first consulting your obstetrician and do let your plastic surgeon or esthetician know you are pregnant before any procedures begin.

The body does go through a full makeover during pregnancy, from head to toe. The baby bump may be the most obvious but it is not the only part of the body affected by pregnancy. Many changes are invisible to the observer’s eye but they are all keenly felt by the expectant mother.

In addition to the baby bump, some outward changes that might be visible in a selfie include a rounder-than-usual face, fuller breasts, hair that’s become more lush as the pregnancy advances, and fingernails longer and stronger than ever before.