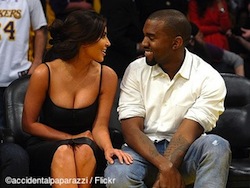 When Kim Kardashian found out she was pregnant with Kanye West’s baby it was apparently as much a surprise to her as it was to the world. Fertility issues, similar to those suffered by her sister Khloe, have plagued Kim for years, but the star chose to keep her fertility issues private despite the media involvement in Khloe’s reproductive challenges.

In a recent interview, Kim opened up about fertility issues no one knew she was experiencing: "Khloe has been very open about her fertility issues and I think I was always really kind of quiet about mine. I have similar issues, and so it was a pleasant surprise when so many doctors were telling me one thing and then the opposite happens."

Despite appearing happy in the news about the pregnancy, Kim was not so thrilled with the idea of motherhood in recent episodes of Kim and Kourtney Take Miami. Using words like “slob-kabob” and claiming her sister’s attitude after becoming a mom led her to “second guess wanting to have kids,” Kardashian was nowhere near ready for the news she would soon receive. After tears and yelling, Kourtney retaliated against the negative words by telling Kim to “talk to me once you have a child.”

While we’re not likely to hear any news of a Kardashian/Kanye wedding in the near future, as the couple plans on focusing on the baby for now, that does not mean the Kardashians are leaving the media hanging around with nothing to report. According to one interview, Kourtney is willing to support Kim’s baby in any way she can, including breastfeeding the baby. The sisters claim the idea of breastfeeding was just something they talked about when they were younger, but Kourtney admits she told Kim she would be “freaked out” about breastfeeding her sister’s baby.