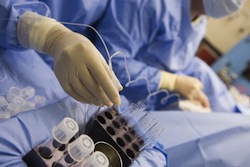 At the Center for Reproductive Medicine at Nanfang Hospital in the People's Republic of China, researchers believed there was a possible link between assisted reproductive technology (ART) and spontaneous abortion caused by improper DNA methylation.

Conclusion: After reviewing all samples, researchers found a link between DNA methylation, but the number of spontaneous abortion associated with the link was no greater in women who used ART to conceive than women who conceived naturally. Loci used in the study does not fully represent a large portion of developmental genes, so other causes for spontaneous abortion could be relevant.