Emerging 3-Parent IVF May be Harmful to Baby 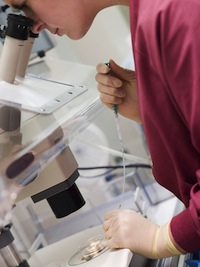 About one person in every 4,000 is affected with a mitochondrial disease, passed down through the mother’s bloodline. Symptoms, including minor learning disabilities, can be mild but they can be tragically severe, too. Dementia, sensory loss, gastrointestinal deformities, and premature death can result.

A seemingly miraculous new form of in vitro fertilization (IVF) promises to bypass a woman’s genetically compromised DNA to produce a child free of whatever hereditary disorders haunt a bloodline but some genetic scientists in the United States and the United Kingdom are urging governing bodies to wait a while before approving this procedure.  A growing body of scientific study is indicating this 3-parent IVF therapy may eliminate one type of illness while contributing to others.

Evolutionary biologist Damian Dowling says a sizable body of very insightful research is being left out of the discussion about the safety of MR. Dowling, affiliated with Monash University in Melbourne, Australia, is calling for a halt to plans being drafted in the UK that are expected to legalize the procedure in 2014, making it likely the first MR baby will be born in 2015. He and like-minded colleagues have published their concerns that the risk of MR therapy is being downplayed. Their concerns are available for public view in the latest issue of the journal, Science.

Their paper describes MR therapy as an “exciting prospect” and they are not opposed to its eventual use. They are concerned, however, that studies suggesting health risks to the offspring are being ignored.

Numerous studies on fruit flies, beetles, mice, and crustaceans are finding health problems associated with fertility and longevity to the offspring of animals treated with MR therapy. The problems are most apparent in the male offspring, a finding of particular concern since the UK proposal is to allow only male embryos to develop and be used for implantation. The current proposal under consideration calls for destruction of female embryos to eliminate any chance the mitochondrial disease will be passed along to future generations.

Dowling and his fellow authors ask that discussion of legalization of MR be put on hold until more thorough research can be done.