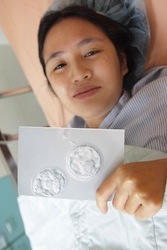 Time and improved technology have increased the odds of just one implanted embryo leading to success, a breakthrough hailed by the medical community. Many families considering IVF may want more than one child but it’s safer for the child and the mother if one child is born at a time.

In the past five years, the number of multiple births has declined dramatically but the rate of twin births has maintained a steady pace. There is less risk to mother and children when twins are born versus three or more but twin births remain at high risk for premature birth and other health problems that generate serious concern.

According to the US Centers for Disease Control and Prevention (CDC), as many as 46 percent of babies born from IVF are multiple births. Most of these multiple births are twins. Without assisted reproductive technologies (ART), the rate of twins in the general population is only 3 percent.

Fertility specialists can now determine with exceptional accuracy which individual embryo of many is the one most likely to result in a healthy singleton birth. The American Society for Reproductive Medicine (ASRM) has issued updated guidelines to fertility specialists advocating singleton births over twin births. The ASRM also advocates counseling patients about the risks involved with multiple births and embryo transfers and noting in patient records that such counseling has been done.

Even though the ASRM guidelines call for singleton babies, there are mitigating circumstances, such as a woman’s age, that make multiple implants the better option for success. Some would-be parents continue to prefer multiple implants to minimize the expense of repeated cycles.

Some patients consider twins two for the price of one but Dr. Fady Sharara urges caution to this thought. Sharara says, "I tell my patients twins are not twice the fun. One is hard enough. Two at a time is a killer for some people. Some marriages don't survive this."

In an attempt to persuade 48 couples in his care, Sharara offered free embryo freezing and free medications if the patient agreed to transfer one embryo instead of two at a time. Eighteen couples refused his offer, citing insurance coverage and “two for the price of one” reasons.