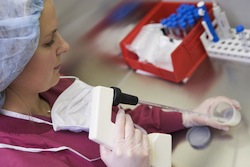 Cancer treatments like radiation and chemotherapy have advanced dramatically in the last few decades. Cancer survival rates in children, teens and adults are higher than ever, but for pre-pubescent boys, those treatments often leave them infertile. After puberty, sperm can be collected and frozen for use in fertility treatments in the future, but this option is not available prior to puberty. However, according to a professor from the University of Texas San Antonio, stem cells may provide the answer to restoring fertility.

Primates are extremely close to humans on a genetic level, which makes the outcome of this model important to the medical community. But just because the model worked in a primate does not mean the concept is ready for human clinical trials. Researchers need to establish a timeline for harvest and reintroduction. Details pertaining to how many stem cells to harvest and how many stem cells to reintroduce in a given attempt also need to be established with further study.

While the idea is new to researchers and clinics in the United States, there are currently clinics located throughout the world that preserve stem cells for cancer patients. According to Professor Hermann, “There are currently only a handful of clinics around the world that will remove and preserve testicular stem cell samples from prepubertal patients, and that limits the availability of candidates. Until more clinics get on board and save stem cells for patients, we are limited in what we can do to test transplantation in clinical trials.”

Stem cell fertility preservation gives the youngest cancer patients hope for future fertility, but stem cell preservation could be used for all male cancer patients as a second line of protection. While freezing sperm is an effective means of preserving the ability to father a child, stem cells could give men who thought their fertility was erased for good the ability to naturally father a child again.