The government of the United Kingdom (UK) is in the midst of deciding whether or not to add legal provisions to national law that will allow a new form of in vitro fertilization (IVF) to become a standard option for infertility treatments. The new process, called mitochondrial replacement, is based on a three-person IVF procedure that eliminates the possibility a woman will pass certain inherited diseases to her children. Before any further parliamentary debate can continue, the UK government has invited the public to offer feedback and other comments on the proposal. 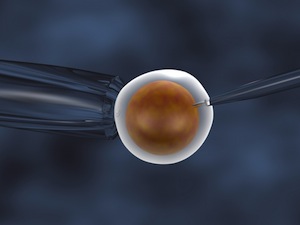 In the UK, one of every 200 children is affected by a flaw in the mitochondrial DNA it inherited from its mother. Symptoms range from mild to severe and some are fatal. When a daughter is born with the inherited genetic flaw, she passes it to the children she will someday bear and the risk continues from generation to generation.

Every cell in the body contains mitochondria, responsible for respiration and energy production at the cellular level. These vital powerhouses contain DNA that is different from the DNA in the nucleus of the same cell. All children inherit mitochondrial DNA from their mothers, not their fathers.

Sperm cells do contain trace amounts of mitochondrial DNA but it is destroyed once the sperm has fertilized an egg.

Two English researchers — Mary Herbert and Doug Turnbull — developed a way to remove the mitochondrial DNA from the egg of a woman known to carry mitochondria-based diseases in her bloodline. Removing it ensures her children are never at risk of developing the inherited disorders but the egg will never be fertilized without mitochondrial DNA.

Mitochondrial DNA replacement and fertilization take place in a lab setting and the resulting embryo is implanted, via traditional IVF procedures, into the biological mother so she can bear the baby herself. The tiny amount of donor mitochondrial DNA accounts for less than 1% of all the genes in the embryo the procedure produces.

Critics from the Human Genetics Alert organization fear legalization of this procedure opens the door to enhanced designer babies and will make it difficult in the future to oppose genetic modification of humans.

If the drafted proposal is accepted, it will become a part of the Human Fertilisation & Embryology Act 1990 and the procedure is likely to be covered under the national health system medical care plan. The UK government welcomes all commentary from any interested party until the close of business on May 21, 2014.