Why Certain Fats are Better Than Others 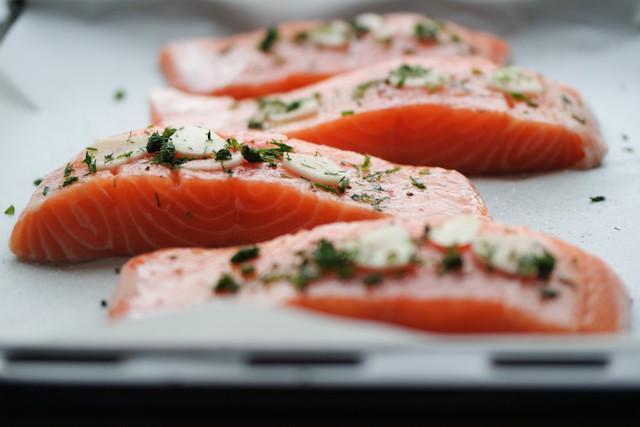 For many years, adding fat into our diets has gotten a bad rap. While it is true that eating an overabundance of fatty foods is a major cause of heart disease, stroke, diabetes and more, recent research sheds new light on the whole fat picture.

In a paper recently published in the journal, Cell, researchers at the University of California San Diego School of Medicine offered an explanation at the molecular level for why some fats are better than others. Saturated fatty acids such as palmitic acid- found in foods such as butter and lard, activate a specific molecule that begins a pathway leading to the development of type 2 diabetes, insulin resistance, obesity, and atherosclerosis. Unsaturated fatty acids such as palmitoleic acid (POA) and eicosapetnaenoic acid (EPA), found in foods such as fresh water fish and nuts, don’t activate these disease-causing molecules, and better yet, they block them from being activated by saturated fats! The researchers think that by understanding the molecular reasons behind why certain types of fats are better for us than others, we may be able to develop dietary supplements to treat obesity.

Read on to get the facts on how you can stay healthy by eating the right fats before you need a dietary supplement to treat diseases caused by eating too much of the wrong kind!

Basically, fats are just a chain of carbon atoms with a bunch of hydrogen and oxygen atoms attached. It’s the order of attached hydrogen atoms that determines the shape of the molecule which determines which type of fat it is and how it acts in our bodies. Saturated fats are “saturated” with hydrogen, meaning that all of their carbons have hydrogen stuck to them, leaving no room for other atoms. This structure makes them solid (usually) at room temperature. Butter, lard, coconut and palm oil, and some of the fat in red meat and poultry are types of saturated fats.

Because these fats are solid at room temperature, you can think of them as being the same way in the body- not moving fluidly through the system like their more-liquid unsaturated counterparts. Their artery-clogging capability is why saturated fats have been associated with elevated cholesterol levels and an increased risk for heart disease. The health value of some saturated fats, though, such as coconut oil, is still being studied. Thomas Brenna, a professor of food science at Cornell University states that “most of the studies involving coconut oil were done with partially hydrogenated coconut oil, which researchers used because they needed to raise the cholesterol levels of rabbits in order to collect certain data,” Dr. Brenna said. “Virgin coconut oil, which has not been chemically treated, is a different thing in terms of a health risk perspective. And maybe it isn’t so bad for you after all.”

And we do need some saturated fat in our diet- the dietary guidelines recommend we consume up to 10% of our calories from saturated fat. This type of fat helps structure our cell membranes and make cholesterol, which is a precursor to hormones such as vitamin D (used to incorporate calcium into the bones), estrogen, progesterone, and bile acids (which are necessary for the digestion of fats). So in order to absorb calcium, have normal sex hormones, and absorb fat, we need a little of the saturated stuff.

These types of fats have a “kink” or bend in their structure- they aren’t saturated with hydrogen items so they do not stack together so easily. They can be monosaturated (olive oil, canola oil, peanut oil, avocados)- which contain one double bond in the chain of carbons and are typically liquid at room temp but solid when refrigerated, or polyunsaturated- meaning they have more double-bonds in their structure so they are even more “bendy” and stay liquid when refrigerated or frozen.

The polyunsaturated group can be further divided into two types of fatty acids- linoleic which are the building blocks of omega 6 fatty acids, and linolenic, the building blocks of omega 3 fatty acids. Most people consume more than enough omega 6’s through seeds, nuts, and the oils extracted from them as well as the refined vegetable oils such as soy oil that are used in most of the snack foods, cookies, crackers, and sweets in the American diet as well as in fast food. Omega 3’s, found in foods such as walnuts, flax seeds, and fatty fish, on the other hand, decrease inflammation and therefore the risk of many chronic diseases. Omega 3’s have been emphasized recently as they are lacking in the American diet. We must balance both types of polyunsaturated acids to maintain optimal health. If you’re like most Americans, you should strive to include more sources of omega-3 fatty acids in your diet from foods such as flax seeds, hemp seeds, pumpkin seeds, sunflower seeds, sesame seeds, soybeans, and wild-caught fatty fish such as salmon.

Unless you want to “trans”-form your arteries into messy clogged passageways, stay away from this type of fat. Whereas we need some saturated fat and definitely unsaturated fats in our diet, we don’t need any trans fat. These are produced through a chemical process called hydrogenation, in which the structure of oil is changed from its natural unsaturated form to a saturated one, making it solid at room temperature so that it becomes spreadable (some kinds of margarine and peanut butter) and have increased shelf life (baked goods).

The body doesn’t know what to do with these man-made trans fats so it makes sense that it probably won’t do you any good. In fact, this is the worst type of fat and it’s recommended that we keep trans fatty acid consumption as low as possible. Avoid a product if the ingredient list includes the words “partially hydrogenated.” Even if the label says “0 grams of trans fats,” if it’s partially hydrogenated it may have less than 0.5 grams per serving but this won’t be the case when more than one serving is consumed.

Fat is essential-literally! We need the two essential fatty acids (omega 3 and omega 6 fats) that the body cannot produce on its own and which serves a wide variety of physiological functions in the body. Fat also aids in the absorption and transport of fat-soluble vitamins (A, D, E, and K and other fat-soluble nutrients- so be sure to pour some olive oil over your salad to reap the benefits of your veggies!  We also need fat to help maintain our body temperatures and cushion our vital organs to protect them from injury.

Fat is a great source of energy so when you’re on the run and only have time for a quick energy-boosting snack, a fat-source is the perfect pick. Try peanut butter (non-hydrogenated) and apple, hummus and pita pieces, or a tasty trail mix including almonds, seeds, and a little dark chocolate (hey- chocolate’s allowed…we do need some saturated fat!)