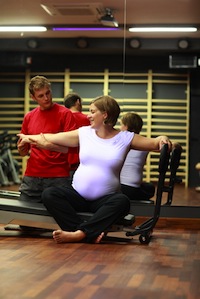 Just about everybody knows they need to get more exercise but it’s easier to work up an excuse than it is to work up a sweat. Researchers in Baltimore may have discovered a way to overcome those excuses. They’ve discovered that when one spouse gets plenty of exercise, his or her spouse is more likely to exercise regularly, too.

The research was conducted on spouses but the results probably work just as well when a couple is in a committed long-term relationship, married or not. Laura Cobb, a doctoral student at the Johns Hopkins Bloomberg School of Public Health and co-author of the study, says, “The best peer pressure to get moving could be coming from the person who sits across from you at the breakfast table.”

The findings of her study — “Physical Activity among Married Couples in the Atherosclerosis Risk in Communities (ARIC) Study” — were presented on March 5 at the American Heart Association’s (AHA’s) EPI/Lifestyle 2015 Scientific Sessions. All study participants were middle-aged married couples but younger couples might benefit from the study’s findings as well.

Cobb and her colleagues pored through records of 15,792 middle-aged adults, including 3,261 married couples, who participated in the Atherosclerosis Risk in Communities Study which began in 1987. All study participants were from Maryland, Minnesota, Mississippi, or North Carolina.

The researchers discovered that, in the first interview:

Exercise recommendations used in the study came from the AHA, which recommends:

Of the participants in the Johns Hopkins study:

Cobb says, “This study tells us that one spouse could have a really positive impact on the other when it comes to staying fit and healthy for the long haul.” It also suggests healthcare workers might have better luck counseling couples together on the importance of exercise rather than counseling individuals alone.