The government of the United Kingdom recommends that every British citizen consume five servings of fruits and/or vegetables every day for optimum health. A new study from the University College London (UCL) says more is better. The research indicates that people of all ages live longer and healthier when they have at least seven servings a day of fruits and veggies.

Dr. Oyinola Oyebode, from the Department of Epidemiology and Public Health at UCL, and her team of researchers pored through the eating habits of 65,226 men and women to see what they routinely ate, what ailments they suffered, and when and how they died. The data was taken from the Health Survey for England covering the years 2001 through 2008. 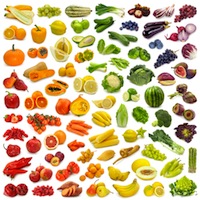 The UCL study defined a serving as about 80 grams (3 ounces), or roughly one whole large fruit or veggie or a handful of smaller fruits and vegetables. Findings included:

Oyebode says the relation between number of servings and reduced risk of death was "staggering." She acknowledges that other extenuating circumstances such as smoking, alcohol consumption, and level of physical activity contribute to health and well-being but corrections for those factors were included in her analysis.

While some people embrace the findings of the Oyebode study as deliciously good news, others are not so enthused: