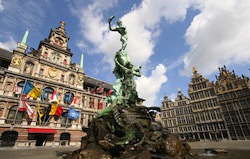 Belgian Jewish Penicillin (Waterzooi) is a chicken soup recipe perfect
for lessening colds in pregnancy. As is common in many European
countries, celery stalks are replaced with ribs and egg yolks are added.

The Holocaust was devastating for the Jewish community of Antwerp. According to estimates, about 65% of all Jewish people died in the Holocaust. At the start of World War II there were around 35,000 Jewish people living in Antwerp and only 15,000 after the war.