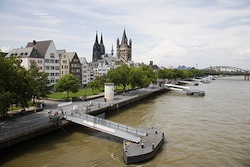 Pregnant women do not need to suffer cold in pregnancy. Researchers believe chicken soup like this Cologne Jewish Penicillin has medicinal properties that shorten the length of cold in pregnancy and lessen the symptoms.

Cologne was the first German city populated by the Jewish community during Roman times. There is a strong Jewish cultural history in Cologne with three synagogues currently serving members, including the famous Roonstrasse Synagogue, which was rebuilt in 1959.

The egg dough will slightly thicken this Cologne Jewish Penicillin giving it a stew texture. The addition of paprika gives the dish a smoky flavor that pairs nicely with the chicken. This recipe can be adjusted to include boneless chicken, vegetables or a different variety of dumpling as desired.