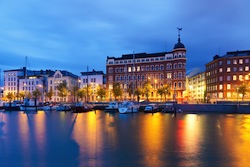 Healing colds in pregnancy is something most pregnant women will have to
deal with at one time or another. Maybe a family member has fallen ill
or a pregnant woman you know. Chicken soup recipes often include
vegetables and rich chicken stock packing tons of vitamins and nutrients in a simple to eat package, making Jewish Penicillin recipes ideal for pregnant women.

The Jewish population in Finland was not significantly affected by World War II. The Finish army chose to fight with the Germans instead of against them and for this reason they were spared from persecution. At least one Finnish army camp included a make-shift synagogue so soldiers could worship as they pleased while fighting with the Nazi army. This phenomenon is thought to be so rare; Finland may have been the only army to have such a religious freedom. Today there are about 1,500 Jews remaining in Finland.