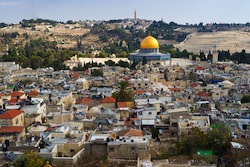 Nowhere in the world are recipes for Jewish Penicillin Chicken Soup more abundant than in Israel and specifically in Jerusalem.

The state of Israel was founded in 1948, after World War II. Over the years the Jewish population of Jerusalem has grown to 570,000 people have immigrated to Jerusalem.

This recipe for Jewish Grandmother’s Chicken Soup was passed down from one generation to the next and was commonly used to fight cold in pregnancy. Science has proven the healthy effects of chicken soup, but there is no study that can compare to the taste of Jewish Penicillin when you’re feeling under the weather.

Variations: Some women treating cold in pregnancy wish to use chicken breasts in place of whole chicken pieces. If chicken breasts are used in this Jewish Penicillin recipe, the step to remove fat can be eliminated and soup served immediately after cooking is complete. Cooking time will be reduced to 1 hour instead of 1 ½ hours – or until breasts fall apart.