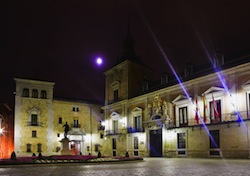 During World War II, Spain was a neutral country. Very little of the war impacted the Jewish populations, but the openness of the country to allow outside Jewish immigrants to use the country as an escape route impacted other countries significantly. It is estimated that some 26,000 immigrants passed through Spain during World War II. The only condition of the passage was that no trace of them be left behind. Diplomats in Spain also directly helped more than 4,000 Jewish people and 2,750 Hungarian refugees by hiding them from Nazi forces. Today, the Jewish population in Spain is estimated to be around 67,000.

During pregnancy, women often try all natural means of fighting cold in pregnancy. Jewish Penicillin recipes like this Quick Spanish Chicken Soup are ideal for pregnant women. The time it takes to prepare the soup is minimal so women spend more time resting and recovering from symptoms of cold in pregnancy than cooking.