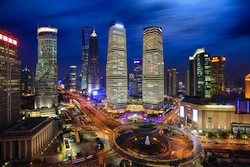 For many Jewish community members, fleeing to safe countries was the
only way to survive World War II. China did not require a visa for
people to pass into the country so many Jewish people chose to enter the
country in hopes of surviving the Holocaust. In all, 20,000 or more Jews made their way into China throughout World War II. The time there was not without trouble. Some local officials took advantage of the immigrants and the German Nazis wanted China to exterminate the entire Jewish population. Only 1,500 of the 20,000 immigrants remain in China today.

Chinese chicken soup is a popular treatment for colds in pregnancy. There are few ingredients but the final flavor is mild enough for use during sickness. Jewish Penicillin recipes like this one may have roots in the immigration of Jews to China.