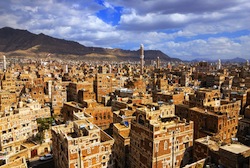 World War II had no significant impact on Yemen, but following the war
the majority of Jews in Yemen were deported to Israel during Operation
Magic Carpet.

Operation Magic Carpet transported nearly 50,000 Yemenite Jews to Israel between 1949 and 1950. Today there are fewer than 350 Jews still living in Yemen which is a Muslim state.

Yemen Jewish Penicillin uses a combination of spices called Hawayji to flavor the otherwise bland soup. Frying the chicken legs before adding to the soup pot does add depth and flavor. Typically, one leg and potato is offered per serving so this recipe is easy to multiply. The bland spices tend to make this chicken soup recipe perfect for pregnant women with colds in pregnancy.