Follow us on Instagram
Our app takes the guesswork out of getting pregnant. Get Obie for iOS Now!
Lifestyle » Food and Nutrition » Jewish Penicillin Chicken Soup Recipe 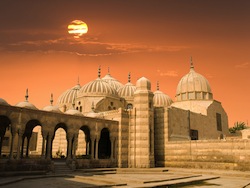 Egyptian food has a great history, and Jewish Penicillin Cairo Chicken
Soup is a great example of how cultures can mix and make for great food.

Mulukhiyah, molokhia, mulukhiyya, malukhiyah, nalita, or Jew’s mallow is the leaves of jute and related Corchorus species used as a vegetable in Middle Eastern, East African, North African, and South Asian cuisine. Mulukhiyyah is rather bitter, and when boiled, the resulting liquid is a thick, highly mucilageinous broth; it is often described as "slimy," rather like cooked okra. Mulukhiyyah is generally eaten cooked, not raw, and is most frequently turned into a kind of soup or stew, typically bearing the same name as the vegetable in the local language.

The Jewish population in Egypt has suffered greatly since 1922 when the Jewish community was 80,000 strong. World War II did not impact the Jewish community in Egypt directly, but the affect of Nazi Germany on an already strained relationship between Jewish and Egyptian culture caused a mass exodus, of sorts. As of 2004, less than 100 Jewish people remain in Egypt.

Despite the lacking Jewish population, there are still feel good chicken soup recipes based in the rich Egyptian culture. Fighting cold in pregnancy with Molokhia offers a rich source of folic acid with a bit of spice.

Variations: There are very few variations to this Jewish Penicillin recipe from Cairo. The garlic step often leaves people questioning the 20 minutes spent browning garlic, but rest assured the garlic will not burn if cooked over simmering heat and stirred often. Molokhia may be difficult to find in some countries and may be replaced with other hearty greens. Greens are the perfect addition to a diet when fighting cold in pregnancy.