Ambien During Pregnancy and Breastfeeding 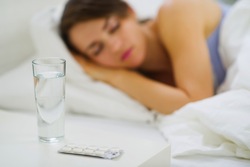 Summary Recommendations: Ambien is prescribed in immediate- or sustained-release varieties. Immediate release Ambien helps users fall asleep more quickly. Sustained-release Ambien has an outer shell to help users fall asleep and an inner medication to help users stay asleep. You should only take Ambien as prescribed. Never share the medications with others or purchase Ambien from any source other than a licensed pharmacy. Some sources of Ambien purchased on the Internet may contain Haldol, a drug used to treat psychosis. Always report side effects, including loss of memory, extreme fatigue and odd behaviors to your physician.

General Precautions: Ambien is typically prescribed for short-term relief of insomnia. The drug is associated with memory loss. Patients have reported eating, driving, talking on the phone and performing other activities while taking Ambien with no memory of the events.

Effects While Trying to Conceive: There does not appear to be any known effect of Ambien on conception, though some patients have reported unwanted pregnancy after taking the drug.

Effects on Pregnancy: Ambien has been placed in pregnancy category C by the Food and Drug Administration. Despite being on the market for more than 10 years, there are no definitive studies on use of the drug during pregnancy. Animal studies have shown increased risk of pregnancy complications and/or pregnancy loss, but the dose of Ambien used in the studies was up to seven times that prescribed to humans.

Ambien is thought to cross the placenta and there are reports of neonatal respiration and breathing problems with use during the final weeks of pregnancy. The problems may be exacerbated if Ambien is combined with other drugs that suppress the central nervous system. Cord blood samples have tested positive for Ambien, but no neonatal withdrawal symptoms have been noted.

Safe During Breastfeeding: Ambien does pass to baby in breast milk, but little is known in terms of contraindications. There have been no reports of negative side effects on infants. Breast milk excreted three hours after taking a single 20 mg dose of Ambien tested positive for the drug, but less than 0.019% of the maternal dose was noted. There are no reported tests on breast milk after prolonged use.