Track your fertility to get pregnant faster!
Postpartum 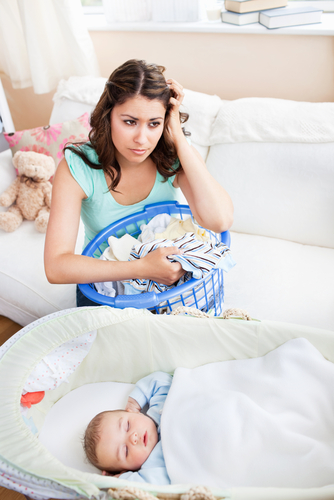 Life with a new baby can be stressful. You have to wake up multiple times a night for feedings. Any semblance of a life schedule is completely shot by this tiny human being and you’re so tired you can barely think straight.

You may have noticed some changes in your memory and the way you think during pregnancy. Some women refer to this as baby brain, but there is no actual medical diagnosis known as baby brain. Baby brain is just a common term used to describe mental changes to thinking and memory that occur during pregnancy and early parenthood.

Hormones and Baby Brain
While medicine may not recognize baby brain as a verifiable medical diagnosis, many pregnant women suffer the same symptoms – so what is to blame for hiccups in memory and thinking during pregnancy? It appears that raging hormones may be to blame yet again for changes during pregnancy. According to some medical professionals, estrogen and progesterone (running through the body at levels up to 40 times higher than they do before pregnancy) can cause quite a change in memory and general thinking. As if that wasn’t enough, oxytocin surges at the end of pregnancy to push the body into labor.

Could Evolution Have Anything to Do With Baby Brain?
Some researchers believe evolution has everything to do with baby brain. When women have children, baby brain helps them to forget everything else in life expect baby and caring for children and family. While this thought process may not be modern, it could be ingrained in the genetic structure of women.

Other contributing factors that may attribute to baby brain include lack of sleep, contemplating life with baby versus life before baby, life changes in preparation for baby and adjustments to a future of motherhood.

What are the Symptoms of Pregnancy Brain?
Most women describe pregnancy brain as simple missing memories. You head into the grocery store with three or four things in your mind to pick up and you forget all but one. Or maybe you head into the bathroom to get something specific and you forget as soon as you walk through the door why you went to the bathroom in the first place. These little memory lapses often occur multiple times a day.

What Can a Pregnant Women or New Mother Do to Combat Baby Brain?