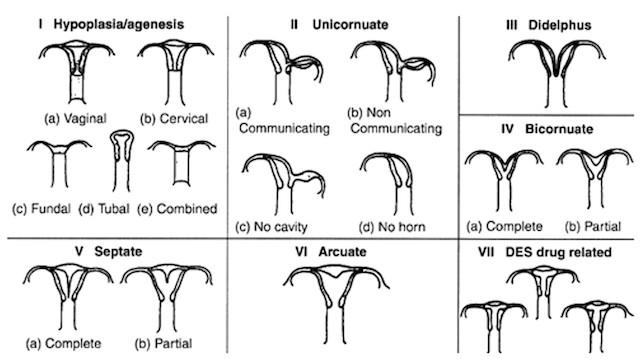 What is a Mullerian or uterine anomaly?

Sometimes the uterus fails to develop correctly. This usually happens when the fetus is inside the uterus, before the baby is born, and it's called as a "congenital uterine anomaly."

I. Hypoplasia/Agenesis – a small or underdeveloped uterus

III. Uterus didelphys – a double uterus that may also be associated with a double cervix and/or vagina.

IV. Bicornuate uterus - A uterus which has 2 horns

V. Septate uterus – a wall or septum partially or fully divides the uterus into two cavities.

VI. Arcuate uterus - A uterus that has an arc

The exact causes for uterine anomalies are not known, but it's generally thought that a combination of genetic and environmental causes are responsible. For example, a particular uterine anomaly characterized by a T-shaped uterus has been found in women whose mothers took the drug diethylstilbestrol (DES) during their pregnancy. Because few women with an irregularly shaped uterus also have close relatives with the same problem, the condition is not thought to run in families.

Pregnancy outcome with bicornuate uterus and other uterine anomalies

What are the symptoms of a uterus anomaly?

In many cases a uterine anomaly causes no problems and in fact may remain undetected until menstruation begins or pregnancy is attempted. If a uterine anomaly such as bicornuate uterus results in a rudimentary uterine horn with no outlet, menstrual outflow will be obstructed. This can result in pain and/or a mass similar to endometriosis that gets worse during periods. If untreated, blood collects in the uterus and may become infected. A uterine anomaly may also be associated with dyspareunia and reproductive problems. These include: Infertility, ectopic pregnancy, recurrent miscarriage, premature delivery, intrauterine fetal growth restriction, abnormal fetal presentation – breech and transverse lies.

The incidence of reproductive complications depends on the particular type of anomaly. A septate uterus is the anomaly most commonly associated with recurrent spontaneous abortion.

What are the procedures used to diagnose uterine anomalies?

The following tests and procedures are used to diagnose a uterine anomaly:

How do you treat a uterine anomaly?

Many uterine anomalies can be corrected surgically in case of difficulties. Metroplasty is most often used to reshape the uterus. However, surgery is not indicated in every case and it can not be performed on a unicornuate uterus, as there is no way to surgically enlarge a uterus. Cervical cerclage may be performed in some cases to prevent the cervix from dilating prematurely and to increase the fetal survival rate.