Sign up for the waitlist for our new app, Obie!
Women's Health » Gynecology

What Is A Bicornuate Uterus?

A bicornuate uterus is the most common congenital uterine anomaly and can impact a woman's reproductive capabilities. In the U.S., it is estimated that bicornuate uterus is seen in 1-5/1,000 women, though this may be an underestimate since not all are diagnosed, especially when they are not severe.

A bicornuate uterus is an abnormality of the uterus that has two horns and a heart shape. The uterus has a wall inside and a partial split outside. If necessary, a bicornuate uterus can be corrected surgically. Few studies of the surgery have been published. In three studies reporting on a total of 11 women, approximately 90% successfully carried a pregnancy to term.

Several studies show that women with a bicornuate uterus have about a 60% success rate in delivering a living child but have a higher risk of cervical incompetence. The condition is associated with an increased rate of spontaneous abortion, though the miscarriage rate is lower with a bicornuate uterus than with a septate uterus. That's probably because the blood supply to the midline indentation is better. Premature labor, a breech presentation and/or a retained or trapped placenta are also common complaints with a bicornuate uterus. 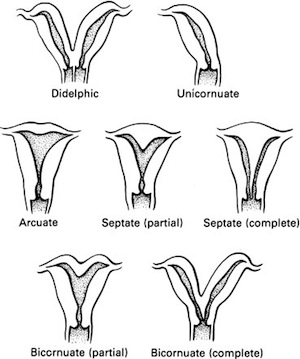 A bicornuate uterus can be confirmed through use of the following techniques:

Metroplasty surgery: To create a large uterine cavity with minimal destruction of uterine tissue is the treatment of choice.
Cervical cerclage: Improved the fetal survival rate in selected patients. Both metroplasty and a cervical cerclage may be prescribed.

Pregnancy Outcome With Bicornuate Uterus And Other Anomalies