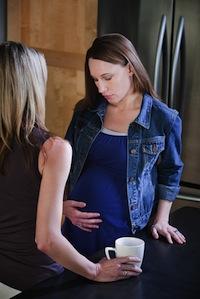 Many things are expected when one is expecting, but there are many elements of pregnancy that come as unexpected surprises to the mother-to-be. The body will surely change, in ways predictable and not, but the emotional aspects of pregnancy can be as mystifying as the mystery of life itself. Here are the stories of three women who experienced the unexpected.

Ambivalence, A Sense Of Loss, And Identity Upheaval

In a recent CNN article, psychologist Lisa McKay expresses ambivalence that lasted throughout her first pregnancy. She describes a sense of tangible loss for her old self and for diminished opportunities on her horizon. McKay spent her life developing her sense of self, her career as a psychologist and writer, a happy marriage, and many friendships. How was her new identity as a mother going to mesh with her familiar self? McKay has no regrets about motherhood. It was much desired even though she expected it would come with “sacrifices of time and energy.” She expected big changes and says they “felt miraculous” but they aren’t necessarily all fun.

Renee Governale expected perfection and maternal bliss from day one. Instead, “nothing I planned went the way I wanted it to,” according to Governale. She lost weight, developed gestational diabetes, and started exercising religiously so she wouldn’t have to take medicine. Her sense of smell magnified strong aromas enough to cause bouts of nausea. She worried more about driving speed, risky maneuvers, and potential accidents. Governale’s mother encouraged her to take time for herself and not to be scared. Governale, 47, wishes she’d had her son when she was younger because she’s learned a child is a lot of work, requiring more energy than expected, but is quick to acknowledge she cherishes the love and joy her son, Michael, has brought into her life.

McKay married at 32, had her first child at 35, and is pregnant with a second child at age 37. Before that, she traveled the globe, earned multiple advanced degrees, and enjoyed professional success. Hers may seem like a fairy-tale life to many but McKay wishes there was some way to do all that and enjoy motherhood at the same time. She advocates playing the cards you’re dealt and forward thinking with a minimum of regrets but she also feels motherhood would’ve been ideally timed when she was younger, at the peak of health, stamina, and energy.

From Joy To Heartache To Renewed Sensitivity

Cynthia Falardeau was elated when, at age 36, she became pregnant after 11 years of trying. She was warned, however, there might be pregnancy complications. That foreboding proved true. Falardeau spent weeks 24 through 33 in the hospital under close observation, and it saved her pregnancy. Her son, Wyatt, born prematurely, also had a problem with an arm that required amputation. On the day of his birth, Falardeau had anticipated joy but felt, instead, like she’d “been hit by a truck.” She felt like a failure and fear her husband would leave. Science, prayer, love, and mental tenacity kept the family together, even through Wyatt’s autism diagnosis. Falardeau likens her story to that of soldiers and athletes who achieve goals through mental endurance. And she says her story has given her a greater appreciation for her own life and “renewed sensitivity for women who fight each day just to survive.”