Follow us on Instagram
Our app takes the guesswork out of getting pregnant. Get Obie for iOS Now!
Getting Pregnant » Fertility

How Age Impacts a Woman's Fertility

As a woman gets older, her chances of getting pregnant and having a healthy baby decline significantly. This is usually due to several reasons including her egg quality, implantation issues, and an increased risk of miscarriage.

When does fertility decline?

According to a 2018 study, fewer than half of university students were able to correctly identify the age at which a woman’s fertility begins to decline, and fewer than one in five knew when a man’s fertility declines. 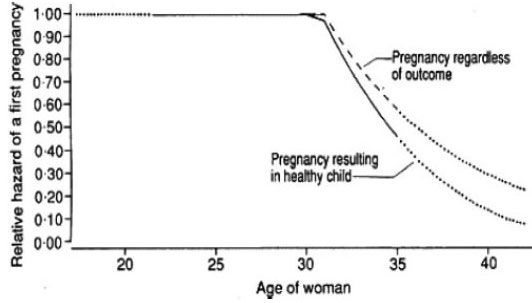 As you age, your chances of getting pregnant spontaneously lessen, while the chances of having a miscarriage and pregnancy complications increase. This process begins earlier than you may think ... between 30-35 years of age. Older and bad-quality eggs make getting pregnant more difficult and can increase the risk of a miscarriage. Getting pregnant by using reproductive technology and IVF, or with an egg donor can increase your chances of having a baby, however, this process also becomes more pronounced as a woman reaches 35 years of age.

If you are over 35, seek an infertility workup after 6 months of trying to get pregnant or earlier if there are known medical issues. 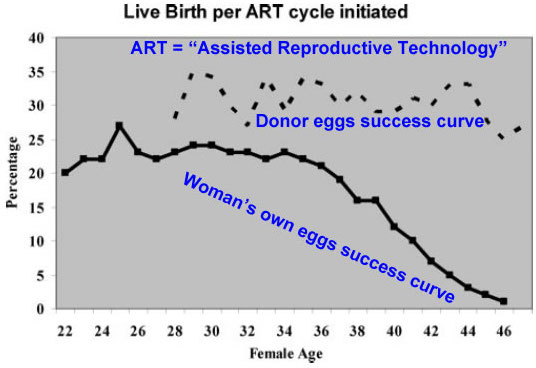 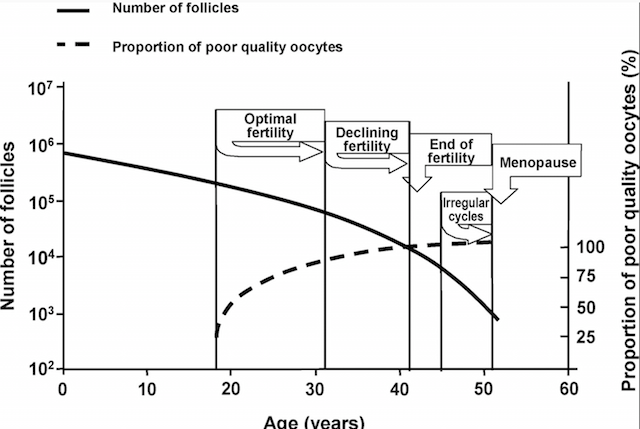 Ovarian reserve testing may be considered for women under 35 years of age if there is a good reason. Almost one in ten women (some younger than 35) who come in for infertility evaluation have such poor ovarian function that their chances of getting pregnant are extremely unlikely. At the current time, this problem cannot be fixed. Therefore, besides testing his sperm count, the assessment of a woman's fertility through ovarian reserve testing is among the most important fertility test that a physician can do.

Women have all the eggs they are ever going to have in their lives before they are even born. Yet the time of baby girl's birth, the ovarian reserve — the number of remaining eggs stored in the follicles — has already decreased dramatically and it decreases further with each year of life. For the rest of her life, ongoing follicular depletion will reduce the number of eggs remaining in the ovaries. In fact, far more eggs will be lost by degeneration than are lost by ovulation.

It would be great if there was a test that could predict when a woman's eggs would become so low-quality that menopause was imminent and pregnancy close to impossible. Unfortunately, there is presently no adequate test to predict ahead of time when you will go into menopause.

Yet, no matter what method you use to get pregnant, staying pregnant and going on to deliver a healthy baby is another issue. The risk of spontaneous pregnancy loss and chromosomal abnormalities increases with age as does the risk for concurrent medical conditions such as hypertension and diabetes.

Chromosomal anomalies and miscarriages increase with a woman's age

As women get older, their miscarriage risks increase. Most miscarriages are due to chromosomal anomalies, and eggs are more likely to have genetic abnormalities, such as the loss or gain of one or more chromosomes, as they age.  Women under 30 years old have an under 10% chance of a miscarriage, but that about doubles for women 35-39 years old, and women over 40 years old, have an over 50 percent chance of having a miscarriage. 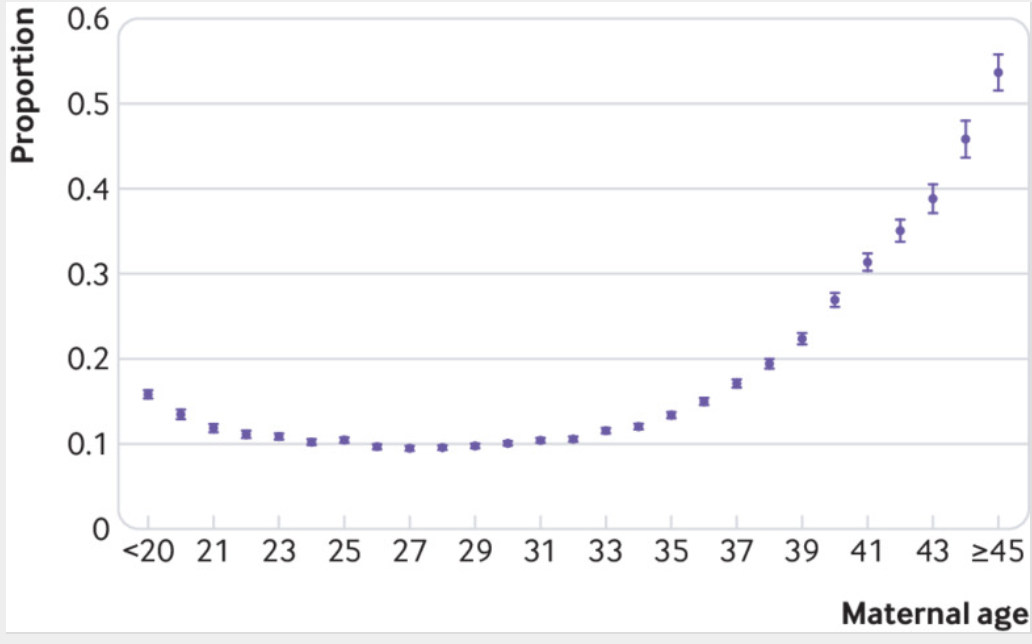 The risk of miscarriage by a woman's age

The perfect age for conception

The female body was created to conceive children early in life. From the beginning of time, women were married at the age of 14 or younger. The first menstrual period was the signal that she was ready to start a family and carry on the human race. As time passed, societal changes redefined the appropriate age for mothers but the female body did not change.

From the age of 20, fertility begins to decline. Once a woman reaches the age of 35, issues with hormonal changes, the age of stored eggs, and the efficacy of the endometrial lining will all play a part in the ability to conceive and carry a child.

Another huge factor linking age to fertility problems are health issues and illness. The older you are the more likely you are to suffer from age-related conditions such as diabetes and high blood pressure. These conditions can all play a huge part in the conception and implantation of a fertilized egg.

However, with the advent of fertility drugs and infertility treatments, women are giving birth to children well into their 40’s. Although your body is aging, it does not mean there is no chance of starting a family later in life.