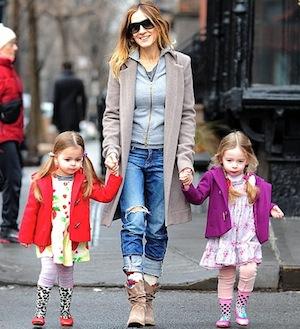 Sometimes we get so star-struck by our favorite celebrities we forget they’re real people, too. Many of them are real people with kids. Some of them are even the celebrity parents of twins. Here are some of the entertainment industry’s big names with twins in the family.

Their twins were born on the couple’s third wedding anniversary (April 30, 2011). The boy, Monroe, and the girl, Moroccan Scott, were delivered by C-section at 35 weeks. Carey suffered from gestational diabetes, hypertension, and preeclampsia; waiting for full-term was getting too risky so an early delivery was planned.

Twin girls, Marion Loretta Elwell and Tabitha Hodge, were born of a surrogate in June 2009. Their middle names (Elwell and Hodge) are from Parker’s maternal family. The twins’ big brother, James Wilkie, born in 2002, was named after Broderick’s father, the late actor James Broderick, and 19th-century English writer, Wilkie Collins.

Fraternal twin girls, Eden and Savannah, were born shortly before Cross turned 45. In vitro fertilization (IVF) made it happen.

Anton James and Olivia Rose were welcomed into the world on January 25, 2001. They have a half-sister, Pacino’s daughter, Julie Marie, born in 1989.

Big brother René Charles, born in 2001, got two little brothers at one time when Nelson and Eddy were born in 2010.

After son, Knox Léon, and daughter, Vivienne Marcheline, were born on July 12, 2008, their parents sold the rights to the twins’ first baby photos for $14 million, making them the most expensive photographs of celebrities ever taken. The money was donated to the Jolie-Pitt Foundation. The twins have a host of siblings: brothers Maddox (born in 2001) and Pax (2003) and sisters Zahara (2005) and Shiloh (2006).

Fraternal twins, Maximilian David and Emme Maribel, were born on February 22, 2008. Twins run in the family, according to Lopez, who has said “My sister also had twins.” The twins have three stepbrothers from Anthony’s earlier relationships.