From her eye-popping 15-carat engagement ring to her elegantly draped gold-clad baby bump, the 28-year-old songstress Ciara dazzled the crowds and cameras on January 26 as she strolled down the red carpet at the 2014 Grammy Awards. She and fiancée, the rapper / producer Future (Nayvadius D. Wilburn), engaged in October on her birthday, are expecting their first child. 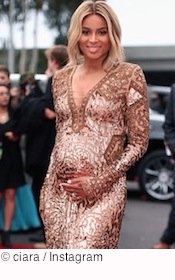 Ciara looked stunning in her slinky, curve-caressing gold beaded gown by Pucci. She reported “three or four fittings were necessary” to get the right fit.

When asked about any pregnancy cravings, she said there’s no one particular thing that she craves but she does have “a habit of eating the same thing over and over and over.” Before arriving at the Grammy Awards red carpet, she said she chowed down on a Cobb salad and fries.

Ciara and Future first started dating in early 2013 and she announced her pregnancy during her January 14, 2014, appearance on the television show, The View. Hidden under the sparkling rock of her engagement ring is a tattoo of the letter “N” which represents Future’s first name.

The singer, who also writes songs, dances, acts, models, and is known for her breathy soprano voice, says growing up as an Army brat prepared her for life on the road as a touring musician. Highlights of her award-winning career include:

The singer’s film career includes roles in the movies: All You’ve Got; Mama, I Want to Sing!, and That’s My Boy. Ciara was a guest judge on the South African TV game show, Idols, and she has a recurring role in The Game.