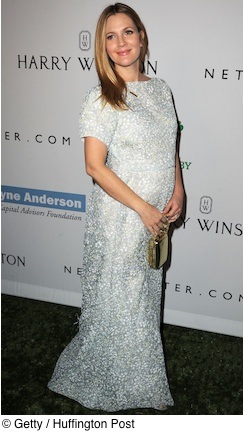 Drew Barrymore describes life as a working mom as “always a juggling act and a balancing act” and that life teaches a person “how to try to be as graceful as you can.” The 38-year-old working mom just announced the impending arrival of her second child so her graceful balancing act will soon include even more responsibility to juggle. In addition, Drew says her second pregnancy is fueled by cravings for greasy fried foods, especially Chinese noodles.

Barrymore and hubby, Will Kopelman, showed off baby bump #2 at the second annual gala for Baby2Baby in Culver City, California, on November 9. Barrymore chose a loose-fitting, simple-but-elegant pale grey and white floral print floor-length dress for the gala, where she was the guest of honor. The couple’s first child, a daughter named Olive, is 14 months old and already pointing to mommy’s tummy while saying “baby,” a gesture that Barrymore describes as “how cool is that?”

Baby2Baby is a star-studded non-profit organization that supplies clothing and essential baby gear to families in need. The organization, with Jessica Alba and Nicole Richie serving as board members, provides assistance each year to more than 67,000 children from newborns to children 12 years old.

On another note, back to those noodles! Barrymore claims to be especially fond of pan-fried Chinese-style noodles. So fond, in fact, she says she plans to seek out the best places in Los Angeles to satisfy the craving.

More tasty tidbits about Barrymore include:

For Barrymore, this second pregnancy is more relaxed than her first, in spite of the juggling, balancing, grace, and penchant for Chinese noodles. She also describes it as overjoyed, surreal, incredible, lucky, miraculous, and blessed.