The blue-eyed blonde beauty who caught Hugh Hefner’s eye when she was just nineteen is expecting her second child and embracing a gluten-free diet. Kendra Wilkinson, now 28, isn’t saying why she’s going gluten free but she is saying this child is a girl. 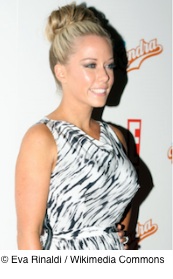 Hef and the Playboy Mansion

Wilkinson was hired as a painted girl for Hugh Hefner’s 78th birthday bash in 2004 after the Playboy tycoon saw a photo of her on his fax machine. Painted girls at the Playboy Mansion wear nothing but the accessories painted on them. Soon after, Wilkinson was asked to be one of Hefner’s three girlfriends so she and her two dogs, Rascal and Martini, moved into the famous mansion.

Life in the Playboy Mansion must have been agreeable to Wilkinson, who stayed there several years until meeting the man she would marry. Hank Baskett, a wide receiver for the Philadelphia Eagles, popped the question at the Seattle Space Needle in 2008. The couple was married at the Playboy Mansion in June 2009.

Wilkinson’s connection to the Philadelphia Eagles began much sooner, however. Her mother, Patti, was once a cheerleader for the team.

Life on reality TV began in 2005 for Wilkinson with the debut of the reality television series, The Girls Next Door, starring Wilkinson, Holly Madison, and Bridget Marquardt. The series followed the lives of Hefner’s three girlfriends.

Wilkinson moved out of the mansion shortly after meeting Baskett and starred in a spin-off reality TV show - Kendra - based on her life as she transitioned from the Playboy Mansion to life on her own to her televised wedding.

Later reality TV appearances include being a contestant on Dancing with the Stars, an episode of Celebrity Wife Swap with Kate Gosselin, and Kendra on Top, premiering in 2012.

Wilkinson had a son, Hank Baskett IV, who was born in 2009. The 9-pound, 5-ounce baby was delivered by cesarean section (c-section). After delivery, baby Hank’s 5’4” mama weighed a disheartening 140 pounds and the family moved from California to Indiana so Daddy Hank could be closer to his team.

Wilkinson fell into a deep depression and didn’t bother brushing her hair and teeth or bathing regularly. She attributes her postpartum depression to feelings of isolation following the Indiana move so soon after having a baby.

The reasons behind Wilkinson’s turn to a gluten-free diet this time around haven’t been revealed but might the Olive Garden have something to do with it? In 2008, Wilkinson made no secret of her fondness of Olive Garden food, calling it her “soul food.” The Italian restaurant chain publicly revealed they were not paying her for her enthusiastic endorsements. Could it be those famous breadsticks present too much temptation for this pregnant fan?