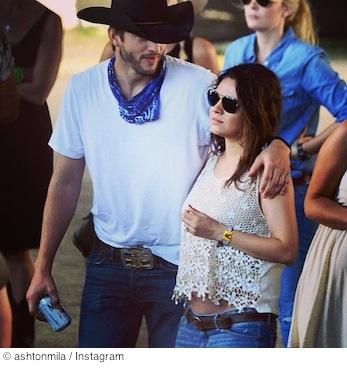 Have you heard? Mila Kunis really is pregnant with Ashton Kutcher’s baby. It’s true. The rumor mill has been working overtime the last few months but Mila’s May 9 appearance on the Ellen DeGeneres Show put all rumors to rest. Mila is pregnant and loving it. She also said she can’t get enough sauerkraut, Ashton’s learning Russian, the services of a very familiar doula will be part of the baby’s birth, and Mila’s grateful for “a little help."

Apparently, Ashton got the jump on Mila’s pregnancy cravings. He stocked the couple’s spare refrigerator with pickles, ice cream, and all kinds of other things he knew women craved during pregnancy. When she mentioned a craving for pickles one night while watching TV, Ashton jumped to the rescue. He rummaged through his specially stocked refrigerator and surprised his fiancée with “the most amazing dill pickle of all time.”

Pickles are just part of the vinegar-based cravings she’s having. Mila claims to be munching on sauerkraut all day long.

Ashton wants his child to fully experience its ancestral heritage from both sides of its family. Mila was born in Russia (in the area that’s now Ukraine) and lived there until her family moved to California when she was 7; English is her second language. Ashton has spent the last six months learning to speak Russian so he can speak in Mila’s native language, too.

Natural with a doula

Mila’s first thoughts were for a natural (no drugs or epidural) delivery at home with the assistance of a midwife. She’s since made plans to have the baby in a hospital that allows the services of a doula. The latest rumor (they never stop) is that Ashton’s sister-in-law, Katie Hightower, will fill the role as a doula.

Natural childbirth is still part of the plan but knowing there’s a full-blown medical staff at the ready if something goes wrong brings an added degree of peace to the minds of these expectant parents.

“A little help” and more secrets

During her conversation with Ellen, Mila hinted at getting “a little help” with the pregnancy but didn’t elaborate. She would not reveal the baby’s name (rumors say it’s a girl) nor its expected date of arrival except to say it’s “sometime this year.”

Have you heard Ashton isn’t the only Kutcher expecting a baby this year? Ashton’s twin brother, Michael, and his wife, Katie (the doula), are expecting a baby of their own in December. But there’s more: the Kutcher boys’ older sister, Tausha, has an October due date, when Mila is rumored to be due, too.