There's no doubt that a keen sense of focus is one of the winning skills of an Olympic athlete and team sports probably require more focus than individual events. As the world watched the US Olympic hockey team going for the gold, there was little evidence that TJ Oshie might have his thoughts frequently straying thousands of miles away to St. Louis, where his fiancée, Lauren Cosgrove, watched from home.

At the time, Cosgrove was within weeks of giving birth to the couple's first child, a daughter. Proud papas everywhere send thoughts of love home to their families but Oshie's thoughts were probably clouded with a great deal of concern, too. His daughter was diagnosed in utero with a life-threatening birth defect that would require immediate surgery just minutes after she was born. Oshie's baby girl, Lyla Grace, had gastroschisis. 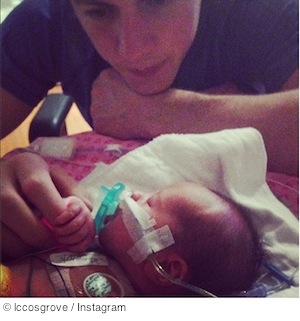 In times past, gastroschisis was almost always fatal but the survival rate now is 90%. Ultrasound scans usually identify the birth defect in time to make appropriate medical arrangements before delivery.

Gastroschisis, a form of a hernia, is a defect of the wall of the belly that allows part of the intestines and/or bowel to protrude outside the baby's abdomen. Sometimes other organs, including the stomach and liver, are exposed, too.

The condition develops in the first weeks of pregnancy, making monitoring throughout the pregnancy a must. The exposed internal organs can become irritated by amniotic fluid and the bowel can twist, swell, or become dangerously distorted at any time during pregnancy and delivery.

According to the US Centers for Disease Control and Prevention (CDC), approximately 1,871 babies are born in the US each year with the birth defect. The cause is still unknown but certain risk factors seem to be associated with the condition:

The hernia almost always occurs on the right side of the baby's belly button and, if small, surgery involves merely repositioning the exposed organs into the abdomen and closing the defect. More complicated cases may require a series of surgeries or a prolonged procedure that gently repositions the organs in stages over a length of time before the defect is sutured shut.

Baby Lyla Grace, born on March 17, is said to be eating normally and recovering beautifully. Oshie says, "She's adorable" and can't take his eyes off her. Cosgrove describes holding her for the first time as "the most wonderful feeling." Lyla Grace will probably go home sooner than originally expected.