Loni Jane Anthony had already made her mark in cyberspace as a photographer/blogger with a strong presence on Instagram, but she made headlines in circles far wider than the social network when she announced her pregnancy in 2013. Many people were pleased to learn of her pregnancy but many were appalled and extremely outspoken about it. It isn't that people were opposed to the pregnancy, they were concerned about the effect her extreme raw vegan diet might have on her baby. 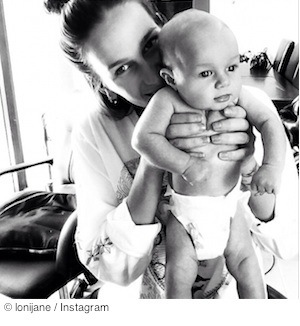 Anthony is a firm believer in the Gerson Diet, which is all about plant-based foods eaten raw or ever-so-slightly cooked. Anthony's personal diet — before, during, and after pregnancy — consists of mostly fruits and water but she eats enough additional foods to maintain an 80/10/10 ratio of carbohydrates/protein/fat. She has added more "good fats" to her daily diet to support breastfeeding but, other than that, she's not planning to change a thing.

The diet seems to have produced no ill effects on Anthony, her pregnancy, or her baby. Rowdy Nash was born on March 2, weighing a healthy 8.7 pounds and measuring almost 22 inches long. If the photos she's posting of him on Instagram are any evidence of health, baby Rowdy is a "perfect" baby boy.

Anthony herself gained more than 37 pounds during pregnancy. She describes the weight gain as mostly baby and fluid and says 22 pounds of it "dropped off me" within two days of Rowdy's birth.

As for childbirth itself, Rowdy was born at 2:00 AM and Anthony felt so good about it, she and the baby were back home by 6:30 AM. It was a natural birth involving no epidural or drugs and she "never got that drop in energy or exhaustion after giving birth." She says her energy level has remained high throughout.

She's not sleep-deprived, either, as many new mothers are. At five weeks, Rowdy sleeps eight hours at night and wakes up hungry. His morning feeding lasts about two hours before he nods off for another couple of hours of sleep.

So, what does this woman eat, exactly? She eats many mono-meals, consisting of lots of one food only, such as bananas. It's not unusual for her to enjoy a meal of ten or more bananas and nothing else. She eats "big meals and lots of carbs, lots of fruit, veggies, big salads, pasta." She also enjoys a smoothie or freshly squeezed juice every day.

She also eats seasonally, believing "that's the way we're designed." She thinks that since certain fruits ripen at certain times of the year, that's when we're supposed to eat them. A summertime supper may consist of 10 fresh mangoes but a warm winter meal may be a "veggie soup or mashed potatoes with avocado on top."